The FA has announced that the 2019/20 Buildbase FA Vase final between Consett and Hebburn Town will kick off at 1pm on Monday, May 3.

They add that despite their best efforts to accommodate a limited number of spectators, a suitable date was not available within the stadium’s calendar and the final will be played behind closed doors.

The 20/21 Vase final on Saturday, May 22 will kick off at 12.15.  A limited number of spectators will be permitted to attend this final, in line with the Government’s roadmap out of lockdown.

Both finals will be broadcast live on BT Sport 1.  The Vase finals will be followed by the Buildbase FA Trophy finals at 5pm and 4.15pm respectively.

The Football Association has released the following statement about the re-structuring of non-league football, which affects the Ebac Northern League:

Following the curtailment of the 2020/21 league season for Steps 3-6 of the National League System (NLS), The FA’s Alliance and Leagues Committees announced that they would consider the feasibility  of undertaking the restructure at Steps 4-6 (which was intended to take effect from the 20/21 season but has been delayed due to the impact of COVID-19).

The Committees have now met to consider this matter and will be recommending to FA Council that the structural changes to the number of divisions in the NLS be completed in order to address the imbalance that currently exists and achieve the ‘pure pyramid’ at Steps 1-6.

As part of the proposals, 110 clubs would be upwardly moved within the pyramid at Steps 4-6 in order to facilitate the new divisions, protecting the integrity of the NLS whilst supporting clubs with a desire and ambition to progress, without undermining the stability of the system. The restructure will have a positive impact on a significant number of clubs, supporting them with reduced travel and costs and providing greater opportunities for generating income via localised fixtures.

FA Council will be considering the recommendations of the Committees in due course and Clubs and Leagues will continue to be kept updated on this process.

In summary, the Committees have proposed that:

[1] NB: A Club must have played in each of the two seasons (both at the same Step) in order to be eligible for upward movement via this process.

All in all it was all a bit strange.  Three months since my last game off pre-lockdown footie.  All the more strange that it was North Ferriby v Seaham Red Star in the third round of the Vase.

The second attempt to decide the tie followed an FA decision to order a replay after Ferriby played an ineligible player in December.  Three months ago Ferriby squeaked through in a penalty shoot-out and yesterday there was only a solitary goal in it, scored late on, in the 87th minute.

And all the more strange for the match being played without fans in attendance.

Given that this was their first competitive game since the end of December, the fitness levels looked surprisingly good.  What was unsurprising was the clear lack of match sharpness by both sides – passes going astray, mis-timed tackles and a lack of cohesive play and moves throughout the match.

Having said that, it was still great to have competitive football back.

The first half was fairly even stevens, with each keeper providing the highlights.  In the 8th minute, Seaham’s Andrew Johnson almost caught Ferriby keeper Jordan Douglas off his line with a header following a Paul Weldon free kick, but Douglas managed to back pedal just in time to get a hand to it.

But it was Red Star’s Andrew Jennison who made the save of the game, stopping a blistering shot by Ferriby’s Jamie Forrester at close quarters in the 19th minute.

Red Star relied for much of the half on long balls up to Johnson, with most of their other attacks coming down the left.  Ferriby’s clearest chances in the first half fell to No. 9 Tom Corner but twice he fired the ball over the bar.

Half time: 0-0, and that was a fair reflection on the 45 minutes.  The second half was different, with a disappointing showing by the visitors who were pegged back for much of the rest of the game, offering little going forward.

In the opening 15 minutes of the half, Ferriby No. 10 Joel Shortland scuffed a shot and Corner put another effort over the bar.  It took Seaham 27 minutes into the half to come up with their best attack – an excellent break down the right by Joe Hailes and substitute Harry Wood, but Ferriby able to clear Wood’s cross.

The decisive moment in the tie came with only minutes to go, with another penalty shootout imminent.  Ferriby substitute Danny East broke down the left and got the ball to Shortland who managed to squeeze the ball under Jennison who had raced off his line, with the ball trundling over the line to seal the match.

Next up for Ferriby on Saturday is West Auckland.

(There was a minute’s silence at the start of the match in honour of Prince Philip.) 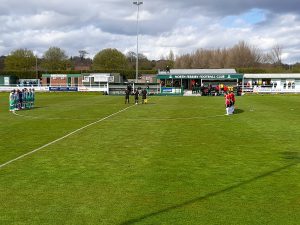 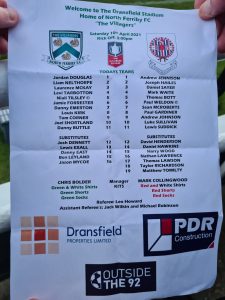 Club launches Just Giving page
Northallerton Town Football Club is devastated that on the evening of 24th March the club and facilities had been broken into and vandalised.
Commercial manager Tim Swales found that our new Hospitality Suite, due to open prior to next season, had been vandalised.  The Suite has been a year long project and is to help the club bring in additional revenue and see the club through these challenging times.
The vandals, under cover of night, destroyed a door to enter the Suite, smashed windows, used machinery to ruin chairs and break various items within the Suite. and put significant dents/holes in the plastering and sills.
Our volunteers have been working behind the scenes to create a unique Hospitality Suite, giving a birds eye view of the pitch and offering a matchday experience. The purpose being to raise additional income for the Club. This is vital for the future survival of the Club.
Chairman Jason Bleanch said:
“Due to the overwhelming support we’ve had following the mindless vandalism we have created a JustGiving page. 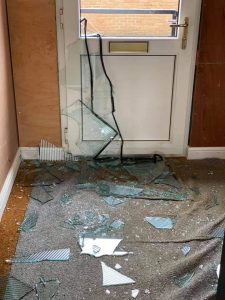 In the current climate, with football on a break and people struggling in so many ways, we will be grateful to anyone who can help us restore our facilities and increase our ability to protect them against this happening again. We’ve received many messages of support from our fellow Clubs and the wider community. On behalf of the Club, thank you for your support.”
To make a donation please go to:
https://www.justgiving.com/crowdfunding/northallerton-town-fc

The League Management Committee (LMC) has decided not to proceed with an end-of-season cup competition.

The FA has issued guidance about the return of football next week but is still waiting for further guidance and information from the Government about the next stage in April, including the attendance of spectators.

“I know people will be disappointed but there is too much uncertainty for us to proceed.  It’s better to make a decision now so that everyone knows what the situation is as early as possible and so that clubs can start planning for the future.

“Hopefully we can now look forward to later this summer when we can start a new season afresh.”

It was also confirmed at the League Management Committee meeting that Ebac has continued its sponsorship of the league.  Glenn added:

“We are very grateful to John Elliott and the team at Ebac for their long-standing support of the league.  The sponsorship means that we can run such a successful league, helping clubs to run, develop and grow.

“The sponsorship is particularly welcome in such challenging times for football.

“Finally, we wish good luck to our teams still in the Buildbase FA Vase and in particular Consett and Hebburn who can finally contest last season’s final, although it’s a huge disappointment that their fans can’t be at Wembley to see such a historic match for both clubs.”

The FA has released this statement to clubs:

“The 2019-20 Buildbase FA Trophy and Buildbase FA Vase finals, due to take place on Sunday 27 September 2020, were unfortunately postponed following updated COVID-19 restrictions from the UK Government. The Finals, which sit under the banner of The FA’s Non-League Finals Day, will now take place at Wembley Stadium connected by EE on Monday 3 May 2021. Despite our best efforts to accommodate limited spectators, a suitable date was sadly not available and both the Buildbase FA Vase final between Consett and Hebburn Town and Buildbase FA Trophy final featuring Harrogate Town and Concord Rangers will be played behind closed doors.

“The 2020-21 Buildbase FA Vase will re-start with outstanding matches in the Third Round Proper on Saturday 10 April 2021 and the competition’s full schedule is as follows:

“The 2020-21 Buildbase FA Trophy semi finals are scheduled for Saturday 27 March 2021 and further details can be viewed here.

“The FA’s 2020-21 Non-League Finals Day featuring both the Buildbase FA Trophy and Buildbase FA Vase finals will be held at Wembley Stadium on Saturday 22 May 2021 with limited spectators in line with the UK Government’s ‘roadmap out of lockdown’ and further information will be provided at the earliest opportunity.

“The four finals will be broadcast live by BT Sport with respective kick off times and further details to be announced in due course.”