10 MINUTES THAT DECIDED THE MATCH 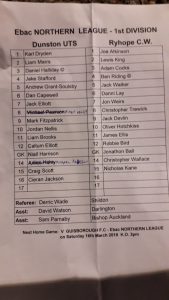 Ryhope won the game in the opening 10 minutes; the same 10 minutes when Dunston should have won it.

The visitors took an absolute battering from the kick-off.  Dunston started like the proverbial.

In the opening minute Mark Fitzpatrick hitting the side netting.  In the second minute, captain Daniel Halliday fizzing the ball across the Ryhope six yard area, going straight through to the other side.  Seconds later Liam Brooks blasting a shot goal-wards only for Ryhope defender Jack Walker to throw his body in the way.

Fifth minute – Jake Stafford with a dangerous cross; and then the closest they came to scoring all night:  Andrew Grant-Soulsby with a header cleared off the line by Danni Lay.

Dunston were on a roll and, unsurprisingly as league leaders, playing with bags of confidence.  That 10-minute spell was as good as it got for the home side.  Ryhope won the game by riding the storm, keeping their defensive focus and not panicking.

Gradually, and a bit slowly to start with, Ryhope got themselves into the game.

They started playing the better football as well.  Dunston’s game plan seemed to be knocking it quick and long up to Brooks and Fitzpatrick, while Ryhope took more touches and were quicker and more nimble in midfield.  The first half’s best contest was Ryhope’s Jack Devlin and James Ellis up against Grant-Soulsby and Dan Capewell.

With 10 minutes to go in the half, Dunston went close again, with a free kick by Liam Marrs forcing Ryhope keeper Joe Atkinson to make a a save at full stretch high up to his right.

Like the first half, Ryhope got better in the second 45.  The best move of the match produced the best goal of the match.  Jon Weirs guided the ball through the Dunston defence planting it perfectly in front of Devlin, allowing the No. 9 to take full advantage, run on goal and stroke it past Karl Dryden in the Dunston goal.

They doubled their lead in the 68th minute when Olly Hotchkiss sent over a high. looping corner into the Dunston box.  While everyone else stood ball watching, it looked like Lay got the slightest of touches before it went it.  He was credited with the goal after the final whistle.

In the 78th minute Dunston protested that they should have been awarded a penalty, claiming that a Ryhope defender flicked the ball with his hand as he tried to head it.  The appeals fell on deaf ears.

In the dying minutes of the game, Ryhope added a third when Robbie Bird managed to prod the ball between two defenders and the keeper to hit the target just inside the far, left hand post to put the finishing touches to their best win of the season.