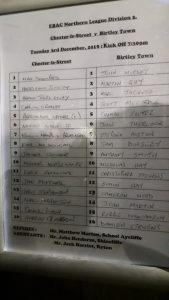 Birtley started this derby match in a very positive manner; so much so that Chester-le-Street could hardly get the ball out of their won half for 10 minutes.  They finished the game off with another strong 10 minutes as they pressed for an equaliser.

In between the sandwich, the Cestrians managed to provide the decisive meat.

In their opening spell, Birtley’s  best chance fell to Christopher Stevens who saw his shot palmed away for a corner by Chester-le-Street keeper Max Coombes.  When the home side finally got going, James Conor had their first shot, a shot blocked by Birtley centre back Thomas Souter.  Then it was over to Nathan Wade who was involved in just about every attack, causing problems down both wings, without being able to provide a killer pass.

Despite their superior possession, it was Birtley who produced two clear scoring chances – Anthony Smith firing across the goal from wide right in the 20th minute and then Christopher Stevens latching on to a ball down the left before also putting his shot across the goal.

Chester-le-Street No. 10 Michael Hepplewhite finished the half with a flourish – curling one shot just wide right and then having another effort saved by Birtley keeper John Mordey.  As soon as the second half started, the home team kept the pressure on.  Kier McDougall found some space for a shot but couldn’t get it on target.  In the 55th minute, Luke Collins produced the shot of the game, only to be thwarted by the save of the game by Mordey.  Collins could hardly have hit the ball any better and it was heading in to the right hand side of the Birtley goal until Mordey made the diving save.  Seconds later, Collins had a shot come off the top of the bar.

In the 61st minute Chester-le-Street again came close to scoring when Callum Greaves had a header hit the inside of the right post before rolling across the goalmouth.  The goal, when it came, wasn’t quite as dramatic as their previous two attempts.  A ball into the box from the left was missed by everyone until it fell to Conor who was lurking at the far post and he had a simple side foot to make it 1-0.

Until their final 10-minute burst, Birtley were only able to produce half chances, but then Robbie Williamson had a shot deflected for a corner, Damien Stevens put an effort high and wide and a Sam Dinsley effort was saved by Coombes at his near post.  They were one tackle away from equalising in the 86th minute when a nicely weighted pass by Nicholas Hay put Stevens through inside the box, but Callum Greaves came up with the best tackle of the night – pushing the ball away from Stevens just as the striker was bearing down on goal.

In the 88th minute Hepplewhite was fouled in the Birtley box and the No. 10 dispatched the spot kick to seal the game. 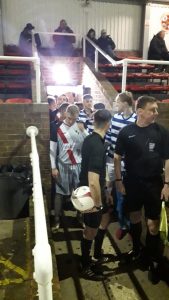 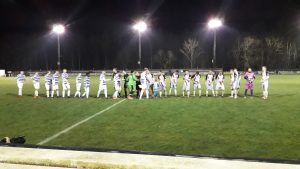 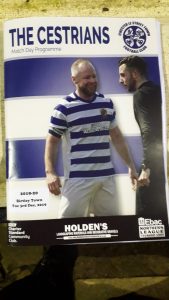