A GAME THAT PERKED UP 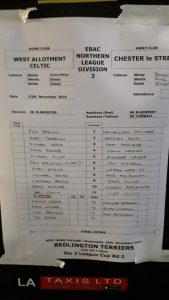 We were a bit grateful for the last 25 minutes of the game.  Up until then it had been a stodgy game, lacking in quality.

In the 4th minute Chester keeper Maximiliano Coombes shouted “keep it” as the ball went astray.  It was advice that both teams would have done well to heed for an hour or so, although Celtic were a little more successful at ball retention than their visitors.

The paciest player on the pitch was Chester’s winger Nathan Wade.  Allotment keeper Finn Hodgson telegraphed a throw out and Wade was quick enough to intercept it, pass it to Michael Hepplewhite who put his shot into the side netting.

Allotment had three shots by Matthew Hayton and Shane Donaghey around the 25-minute mark but they were either off target or straight at Coombes.  In the 35th minute Jake Forster thought he’d put the home side ahead but he was judged offside when he planted a header into the net from a free kick.

Wade’s pace was the crucial factor for the game’s opening goal four minutes after the break.  Although looking suspiciously offside, he managed to get behind the West Allotment back four, latch on to a through ball and tuck it past Hodgson.  The defenders were less than chuffed with the assistant’s decision.

They were more fortunate five minutes later when Hepplewhite was chipped in the penalty area.  The No. 10 stayed on his feet and the attack fizzled out.  If he’d have gone down under the challenge, it would have given the referee a decision to make.

In the 58th minute Allotment No. 2 Mikel Thompson (who was their most positive player throughout the game), took the ball across the Chester box and passed it to Abu Salim whose side-footed shot hit the right hand post.

The hosts finally made it 1-1 in the 65th minute when Hayton managed to squeeze the ball past Coombes.  The equaliser was the cue for the game to perk up.  There was more pace and drive from both teams.

In the 73rd minute Hepplewhite beat the offside trap and his shot was heading in until Michael Scott made an excellent sliding clearance on the goal line.  At the other end, Hayton put a shot over the bar and Thompson put a couple of balls across the six-yard box.

The winner came in the 84th minute when West Allotment won a corner and a Jack Errington header crept past a Chester player on the line.

The game closed with each team putting shots over the bar.  The best chance fell to Thompson who tried to place the ball under Coombes, with the Chester keeper managing to fall on the ball. 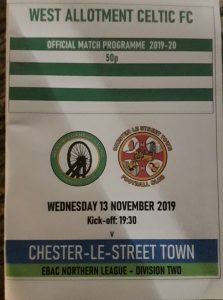