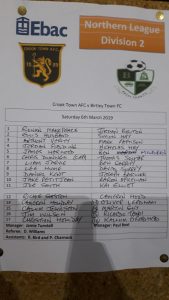 Every once in a while a little gem of a match pops up out of nowhere.  Within seconds this game started to sparkle, and continued to shine for 90 minutes.

Straight from the kick-off Crook’s Liam Jarvie got the ball rolling straight away with a shot that Jordan Bolton managed to get in the way of.  That was just a prelude to what was to come.  And what was to come in the third minute was one of the goals of the season.  A Bolton clearance left the keeper close to the edge of his area, the ball came out to Crook right back Ellis Husband on the halfway line and the No. 2 hit a beautifully curving shot, leaving Bolton stranded as it trundled into the net.  It seemed to take an age to cross the line, keeping Husband in suspense, waiting to see it go in.

Crook have been in a rich, free-scoring vein of form recently (this game seeing them score 30 goals in eight games) and their early play showed why, knocking the ball around and looking very comfortable in possession.  They created the next two chances – a shot by Lee Hume, forcing Bolton into a diving save and then Jake Petitjean with a 25-yard free kick that Bolton stopped at the foot of his right hand post, with the loose ball knocked in by Jarvie, but the No. 7 was flagged for offside.

Birtley got themselves in the game in the 40th minute with the second quality goal of the night.  A poor clearance by Crook saw the ball drop in front of David Surrey and he hit a very sweet, first-time volley that sailed past Crook keeper Ronan Makepeace’s despairing outstretched hands.  The game was definitely on and Birtley turned the half on its head by going into the break in the lead when a Mark Pattison free kick was turned into his own net by Crook’s Joe Smith, to put the visitors 2-1 up.

We still had quite a few more goals to savour.

Just like the first half, the second half started with a bang:  Smith made amends for his own goal by hitting a shot that Bolton couldn’t hang on to, allowing Jarvie to slot the rebound under the keeper in the 48th minute.  We were then treated to a series of goals as each team took it in turn to score:

58’:  Jordan Fielding powering through the Birtley defence and then seeing a shot hit the right hand post before the ball fell kindly to Daniel Kent who hit it first time into the net to make it 3-2.

Eight minutes later Birtley were back level:  Simon Hay well placed in the Crook area at a corner to place a header over Makepeace and just inside the right hand post.

Ten minutes after that it was back to Kent who was allowed to run across the Birtley defence unchallenged.  His left foot shoot moved in the air, leaving Bolton’s feet firmly planted on the ground:  4-3.

In the 82 minute Kent came close to securing his hat-trick, only to be denied by Pattison with a sliding tackle.   The third goal came for Kent in the 87th minute when, un-marked at a corner, his header made it 5-3.

In the 90th minute Crook spurned the chance to make it six when Anthony Verity had his penalty saved by Bolton after the keeper brought Petitjean down in the box.  It was a surprise that Kent didn’t grab the ball to take the spot kick, but after eight goals, it would have been greedy in the extreme to be disappointed at the missed penalty.

In between all the goals the football was really enjoyable – even more so considering the wet conditions underfoot.