A RARE MAN OF THE MATCH AWARD 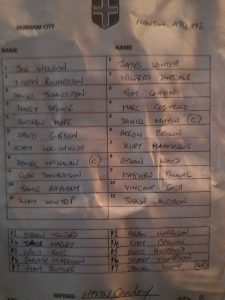 It’s not often I nominate a man of the match.  And it’s as rare as hens’ teeth that a keeper gets the nomination when his team has been beaten 5-0.

But Durham City’s stopper Joe Wilson deserves the plaudits for his second half performance when he pulled off a series of excellent saves to keep the score line vaguely respectable.

Newton Aycliffe didn’t really have to break sweat to progress in this Durham Challenge Cup tie.  An early goal was a portent of things to come.  It was probably the most stress-free game that they’ve have had for quite some time.

Three minutes in and Ethan Wood set Matthew Pennal up with a simple pass.  The Aycliffe No. 9 was given too much space and his shot across Wilson made it 0-1.  12” and left back Tom Gavin struck a free kick round the defensive wall , finding the gap between keeper and post and Aycliffe were on their way.

In the 39th minute Shaun Hudson broke free of the defence and slipped the ball under Wilson to put the visitors 3-0 up.

They had plenty more chances before two late goals gave the score line a realistic look.  In the 90th minute Marc Costello set Kurt Matthews up.  The Aycliffe No. 7 checked and side-footed the ball into the net, wrong-footing the Durham defence and then two minutes later Allan Harrison found the gap between keeper and right hand post to wrap up the scoring with only seconds remaining.

The two late goals shouldn’t detract from the quality of Wilson’s second half display.

In the 48th minute he stood his ground to force a Pennal shot out for a corner.  In the 71st minute he smothered a Matthews shot.  In the 74th minute he saved well after Costello skipped round a defender before shooting.  In the 81st minute he pulled off an excellent block to again deny Pennal, who was one-on-one with the keeper.

And then in the dying minutes of the game he just managed to get his hand to a Stuart Thompson shot to tip the ball over the bar.

Durham didn’t have much going for them apart from the saves.  Daniel Johnston was in the right place at the right time to clear the ball off the goal line in the 19th minute.  In the first half they didn’t have anyone on hand to take advantage of Aycliffe keeper James Winter spilling a high free kick.

Their first shot on target came just before the hour mark but Glen Donaldson hit it straight at Winter.  Liam Wintrip almost took advantage of a lax clearance by Winter but the Aycliffe keeper managed to scramble back across his box to beat Wintrip’s shot away.

Durham’s second half performance was an improvement; they were able to mount a few more attacks, but they’re a very different team from last season.

(Main photo:  Joe Wilson under the floodlights and moonlight)