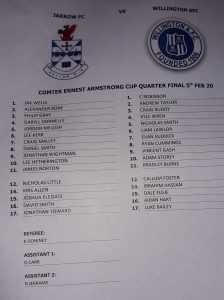 Critics of non-league football (some of whom may never have been to a game) question the quality of the matches.   Any such critic would have been surprised at last night’s game which featured two teams playing anything but hoof ball – plenty of passing, movement off the ball and working the ball through midfield.

And centre stage was veteran Lee Kerr.  It was a pleasure to watch him go about his trade:  the ball always seemed to find him; a good first touch, allowing him more time than anyone else on the pitch; looking up to see what was the best passing option; and then delivering it.

And the football was helped by the pitch being back to its best after (like many other grounds) it had suffered with drainage issues with the heavy rainfall of a month or so ago.

An early mistake by Willington’s Ryan Cummings almost cost his side the lead.  A wayward pass was intercepted by Jarrow’s James Norton who then tried to deftly chip keeper Carl Robinson only to put the ball on to the roof of the net.  Four minutes later, the visitors took the lead from a corner which sailed over to the far post, with the ball prodded in from a yard or so out in a crowded goal mouth by Evan Suddick.

Jarrow were almost level with their next attack, with Lee Hetherington bursting through the defence and his shot scraping the outside of the right hand post.  The hosts kept the pressure on:  a cross by Jonathan Wightman met with a towering header by Daniel Smith that was tipped over by Robinson, and then a 40+ shot by Kerr.  Willington were getting plenty of men behind the ball for Jarrow attacks which were quicker and more direct than the visitors’ whose build-up play was more measured.  In the 34th minute Wightman placed a free kick just outside the ‘D’ a foot or two over the bar.

The No. 9 was involved in the goal that drew Jarrow level just before half-time.  The ball was knocked up to him, he laid it back for Craig Malley who buried the ball into the top right hand corner.

For the opening 10 minutes of the second half, Willington pushed Jarrow back as they went in search of the lead, but it was Jarrow who came closest to scoring when, in the 62nd minute, Smith was put through and struck the ball well, but Robinson get his angles right and was able to make the save.

The two teams then traded shots:  Hetherington flicking the ball over Robinson, only for it to hit the top of the bar; Ryan Cummings putting the ball wide; Malley hitting a shot a foot or so over the bar and then Willington right back Andrew Taylor ending a driving run with a shot that shaved the outside of the right hand post.

The crucial, game-winning goal came in the 78th minute with a Wightman strike converting a through ball by sub Joshua Elcoate.  Willington almost sneaked an equaliser in time added on when Taylor sent over a cross that almost ended up in the top right hand corner of the Jarrow goal.  The last incident of note was Willington No. 4 being sent off in the closing seconds of the match for a second yellow card.

Jarrow progress to the semi-finals.

A couple of footnotes: 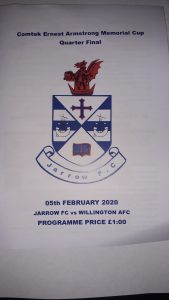