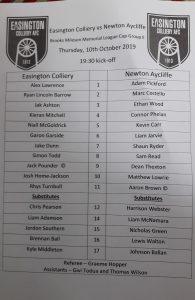 The breezy/windy conditions and the half-time break seemed to be the crucial factors in this game – a game that wasn’t a classic but was certainly good to watch.

For the opening 45 minutes there wasn’t much between the two sides, and Easington didn’t play like a team a division away from their opponents.  The teams traded early chances:  Liam Jarvie not quite able to wrap his foot round the ball to convert a cross by Sam Read, instead putting it wide; and at the other end a Ryan Lincoln Barrow shot ricocheting off Aaron Brown and looping into the goal until Aycliffe keeper Adam Pickford got his finger tips to the ball to nudge it over the bar.

With the wind on their backs, Easington’s play was pacey, direct and on the deck.  At times Aycliffe struggled playing against the wind, knocking too many balls high and long, with the wind sending them off target.

Three minutes before the break Marc Costello put Jarvie through, with his shot saved with his legs by Easington keeper Alex Lawrence.  And then, with seconds to go before half-time, a pass by Aycliffe’s Ethan Wood split the Easington defence and set Dean Thexton away with only Lawrence to beat, with the Aycliffe No. 9 finding the net.  Conceding the goal was tough on Easington who had played a very decent first half.

At the beginning of the second half Aycliffe looked much more comfortable with the wind behind them, but a couple of goalkeeping errors almost turned the fortunes of the teams.

A shot by Easington’s Kieran Mitchell was spilled by Pickford; Josh Home-Jackson was quickest to react.  He picked up the loose ball to score from a couple of yards out.  A minute later, at the other end, Lawrence let a Lewis Walton shot go through his hands and legs, with the ball going perilously close to crossing the line (with loud Aycliffe appeals that it was a goal) before he was able to grab it at the second attempt.

Other defensive mistakes by Easington were most costly.

In the 62nd minute Mitchell fouled Thexton in the box and the No. 9 converted the spot kick, hitting it low and hard to the right.  Aycliffe then started to impose themselves on the game, while Easington weren’t quite as effective as the first half.

In the 77th minute a wayward pass by Garon Garside gifted the ball to Thexton, presenting the striker with the easy task of making it 1-3.

In the closing 10 minutes Easington pressed forward to try and get back into the game, but they conceded a fourth with the last kick of the game, with a shot by Harrison Webster.  The game was a lot closer than the scoreline suggests. 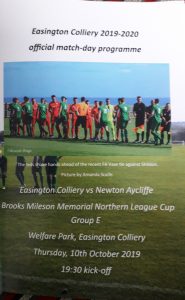