ALL SQUARE AS WINTER COMES KNOCKING ON THE DOOR 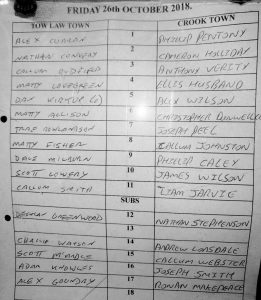 For most of the first half Tow Law Town players, coaches and supporters weren’t happy.  Weren’t happy at all.  They felt aggrieved that most of the officials’ decision went unfairly against them.

Most teams think they officials are against them, but Tow Law seemed to have a case for a crucial decision/non-decision with a couple of minutes to go before the break.  They were convinced Scott Lowery had scored with a shot from a corner only for the referee and assistant to decide that the ball hadn’t crossed the line.

The half-time discussion seemed to suggest that the ball had indeed crossed the line by a foot or more.  It was a rare bit of interest in 45 minutes of football that was more about players huffing and puffing rather than quality passing and moves.

Luckily for the hardy spectators, the game perked up within seconds of the re-start and the second half was much more entertaining.

Some people were still on their way back from the warmth of the clubhouse when Crook No. 11 Liam Jarvie came within inches of opening the scoring – getting the ball just inside the Tow Law box and working himself just enough space to shoot, with the ball hitting the underside of the bar and coming back out.

Tow Law immediately broke up to the other end and left back Callum Oldfield exploited indecision between centre back Ellis Husband and keeper Philip Pentony to poke the ball into the net.  It cheered the home contingent up no end.

Less then five minutes into the half Crook right back Cameron Holliday hit a swerving shot that home keeper Alex Curran did well to stop with his legs.  That chance was quickly followed with a header by Husband that went just over the bar.

Both teams continued to play much better football compared to the first half.

Unfortunately for Crook they were reduced to 10 men when Joe Peel was sent off with a second yellow card after swearing at the ref.  His temper might have cost his team a win.  Even a man down, the visitors continued to press for an equaliser and when it came it was a peach.  If we had a goal of the month competition, it would have been a leading contender.

Philip Caley took a pass 40 yards from the Tow Law goal, turned and spun past one Tow Law player and raced by two more before unleashing a beautifully hit shot that hit the top right corner, giving Curran no chance of stopping it.  It was the kind of goal that more than made up for the rather turgid opening 45 minutes.

Tow Law finished the stronger of the two sides with another swerving shot – this time by Lowery – an off-target shot by Nathan Convery and a header by Trae Rowlandson, but Caley’s goal was good enough to earn the visitors a point.

PS – I can officially confirm that winter is on its way.  It was “brisk” enough for several layers and a woolly hat to be deployed and the gritters were out on the roads around Ironworks Road.  Mind you, it’s probably quite late in the year for that to be happening in Tow Law.