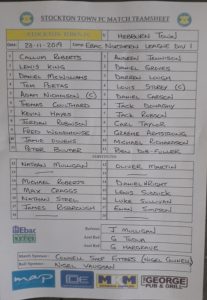 For 45 minutes this game lived up to its billing – 45 minutes of intense football between two of the best teams in the league.  Sharp, quick passing. Intelligent runs off the ball.  Some top notch defending – thwarting some promising attacks.

For the opening 20 minutes, they traded chances:  Hebburn’s Graeme Armstrong with a shot at Stockton keeper Callum Roberts; a quick shimmy by Stockton’s Jamie Owens, making himself some space for a shot that went just past the post; a Peter Bulmer pass to Stockton winger Kevin Hayes, whose dangerous cross hit a defender to go out for a corner; and then a Ben Dibb-Fuller lob over Roberts, missing the target by only a foot or two.

The deadlock was broken in the 32nd minute.  Stockton captain Adam Nicholson had a shot well blocked by Hebburn keeper Andrew Jennison, with the ball spilling out for a corner, within millimetres of Fred Woodhouse in front of an empty net.  Nicholson managed to get a header to the corner, with the ball bouncing off the ground and looping over Jennison and defenders to make it 1-0.

Stockton then had their best spell, capped with Jennison making a diving, one-handed save to keep out a curling Hayes shot that was heading into the net.  But Hebburn finished the half the stronger of the two sides with two chances and a goal.

Dibb-Fuller had a shot deflected past the outside of the post and a Michael Richardson shot was saved with his legs by a diving block by Roberts.  Hebburn made it 1-1 with two minutes to go.  Roberts made another save with his legs for an Armstrong shot, but the ball skidded to Richardson who had the simple task of knocking it into the net.  All square, and rightly so.

However, in the second half the game took an unexpected turn.  What wasn’t surprising was that Stockton stepped up a gear or two.  But, bemusingly, Hebburn failed to turn up and effectively ceded the game to their opponents.

From the off, Stockton pressed.  Lewis King saw an effort bounce off the top of the bar in the first minute after the re-start.  After six minutes they were ahead, with Owens taking a couple of touches before hitting the ball inside the right hand post, with a clinical finish.  And they kept on pressing – another Owens shot, a Hayes cross headed clear by Danny Carson and a diving save by Jennison for yet another Owens shot.  Hebburn seemed to be sitting back and allowing Stockton to attack.

It wasn’t until 30 minutes into the half before Hebburn were able to exert any real pressure of their own, and even then they didn’t create too many clear cut chances.

In the 82nd minute it was all over.  Hayes had a cross deflected, with the ball falling kindly to Nathan Mulligan who knocked it into the net.  Hayes produced a pile driver of a shot in the 88th minute, with his shot going wide of the left hand post.

It may not have been a six-pointer as both teams battle for the title, but it will clearly give Stockton a big psychological boost. 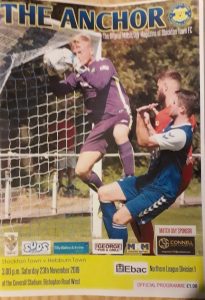