AND SO IT CAME TO PASS 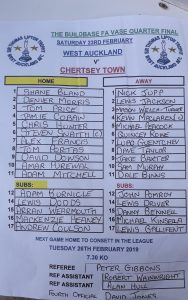 In pre-match interviews West manager Gary Forrest was keen to stress some key points that would decide the game:  making good decisions, not making mistakes and taking chances.

West made some bad decisions and mistakes; Chertsey took their chances.

For the first time in quite some time, we don’t have a representative in the semi-finals of the Vase.  And I didn’t meet anyone at the end of the game who thought anything other than Chertsey deserved their win.

West Auckland’s performance in the last two Vase games were like chalk and cheese – excellent against Hebburn, yesterday sluggish and wasteful.  Their first half performance was particularly disappointing.  They started slowly and handed the initiative to Chertsey, who took full advantage.

In the 9th minute a through ball allowed left winger Dale Binns to get ahead of Denver Morris, run on goal and poke it past Shane Bland as he came off his line.  Binns and Chertsey No. 9 Jake Baxter proved a handful with their pace and strength.

It took West almost 20 minutes before they got anything close to settling into the game, with Adam Mitchell looking their sharpest, liveliest player on the left.  Even with that improvement, Chertsey still looked the better side, with better team play and causing more problems with their attacks than the hosts.

Chertsey doubled their lead in the 28th minute when a free kick was sent into the box.  Centre back Michael Peacock managed to get round a couple of West defenders.  His shot ricocheted to fellow centre back Quincey Rowe who swung a foot and hit the back of the net.

They almost fell further behind three minutes later when Lubo Guentchev hit a neat flick pass to Baxter whose first shot was well saved by Bland diving down to his left, but he could only push it back out, giving Baxter a second chance, only for him to hit a volley wide with much of the goal to aim for.

At the other end West failed to test Chertsey keeper Nick Jupp with any decent shots.

West were better in the second half, to a degree.  Their passing improved and they had more of the ball, but for most of the second 45 minutes Chertsey looked relatively comfortable relying on sitting back and trying to hit West on the break.

Several times West got themselves into potentially dangerous situations, only for players to make poor decisions when delivering the final ball – failing to find a team mate or hitting it too close to Jupp in the visitors’ goal.

West substitutes Arran Wearmouth and Adam Burnicle certainly improved their play.  Within a couple of minutes of coming on, Burnicle had one of their few direct shots, only for him to hit it straight at Jupp.  He followed that up in the 74th minute when he had another shot which went just wide of the right hand post.

Chertsey’s quick break tactic almost produced their third when Guentchev broke free in the 87th minute, with this shot forcing Bland into a good save.   The West No. 1 had to follow that up by diving at Baxter’s feet to get to the loose ball.

And that was that.  Out of the Vase.  No complaints.