ANOTHER CRACKER – PURE AND SIMPLE 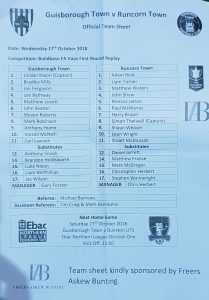 It’s difficult to resist resorting to clichés after the kind of cup-tie that the Towns of Guisborough and Runcorn produced last night.  It might be best just to let the action do the talking.  Sitting comfortably?  This could take some time:

7” – a well-judged flick header by Guisborough No. 9 Anthony Hume allows Mason McNeill to run into the box and his pull back is just a couple of feet from two of his team mates trying to connect with his pass.  The “zip” of a cup tie was on show from the off, with both teams playing a pacey passing game.

And then in the 21st minute Runcorn take the lead with a lightning quick break down the right by their No. 9 Shaun Weaver.  Left winger Stuart McDonald pulled Guisborough defenders away with a run at the far post, leaving a gap for Brazel to run into.  He connects with Weaver’s pass and powers it past Nixon.  Three minutes later Weaver almost got on the score sheet with an excellent, crisp strike that hits the bar, with Nixon rooted to the spot.

At the other end, McNeill forces Runcorn keeper Adam Reid to spread himself to pull off the best save of the half, with two follow-up strikes blocked by defenders.  Guisborough manage to level the game when a cross by Bradley Mills is left by McNeill, allowing Hume to hit it first time and find the inside of the net, just inside the post.

And then with a minute to go before the end of the half, Weaver was allowed to run right across the Guisborough box without a home defender tackling him, giving him the time and space to curl it past Nixon and in, just inside the left post.  Another quality strike makes it 1-2.

In a game being played at full throttle, both No. 9s were leading by example.

The visitors started the second half looking stronger and quicker than Guisborough.  In the 50th minute Weaver surprisingly missed the target with a turn and shot.  The visitors were playing a high, pressing game, putting the Guisborough back four under immediate pressure.  The hosts were being forced to play at Runcorn’s tempo and pace, but they forced their way back into the game in the 61st minute when a cross by Carl Lawson seemed to get a deflection, giving Mark Robinson the opportunity to despatch it into the net.

The two sides then started trading attacks, with end-to-end football.  Hume scuffed a half chance and then Guisborough left back Joe Ferguson cleared a Leon Wright cross off his line.  It developed into a more even match, with the second Guisborough strike taking some of the steam out of Runcorn’s play.

In the 75th minute it was the turn of a Runcorn defender to clear the ball away from his own line – Marcus James managing to get to a Hume header before it could cross the line.  With only a couple of minutes of normal time to go, three Guisborough players tried unsuccessfully to find a way past a packed Runcorn defence,  Both Hume and Weaver had one more chance each before the game was sent into extra time.

And there was no let up in the number of chances in the extra time, including Guisborough substitute Brandon Holdsworth having a chance headed clear by James a yard from the line.

The game started to turn decisively Runcorn’s way in the 5th minute of extra time when a Weaver header curled in past Nixon.

Guisborough then created a whole series of chances:  a Steven Roberts cross just evading Holdsworth; a thundering shot by Jay Wilson which Reid did well to push away, diving down to his right.  That was quickly followed by another good save following a snap shot by Guisborough No. 8 Mark Robinson.

Desperate times called for desperate measures and Nixon again went forward at set pieces with only minutes of the match to go – trying to repeat scoring exploits from earlier in the season.  As Guisborough piled forward, Runcorn tried to hit them on the quick break counter-attack.

The nail was hammered into Guisborough’s coffin in the final seconds of the game.  Runcorn were given a free kick close to the edge of the pitch and several of their players ran towards the ball.  The Guisborough players all followed them, leaving Stuart McDonald all alone in front of goal to receive the free kick.  He produced a great volley to end Guisborough’s Vase campaign.

As I said, another cracker; pure and simple.

PS – a couple of notes about two of the Runcorn players:  ground hopper Stan Williamson said Weaver reminded him both in appearance and style of legendary non-league goal scorer Paul Chow.  Two other people described his play as “quick and slick”.  Surprisingly, because of the unavailability of other players, he was drafted in as a stand-in centre forward on the night.  Members of the Runcorn contingent said he normally plays in centre midfield.  He might have just found a new niche in the team.

And secondly, a mention for Leon Wright – a 16 year-old making his debut in the starting 11 for Runcorn.  In a rough and tumble cup tie, he more than held his own and wasn’t daunted by the occasion, lasting well into extra time before being substituted.  He’s not the tallest of players, but he didn’t back down when squaring up to Guisborough centre back Matthew Lovatt, before being unceremoniously spun to the ground by Ferguson (who was lucky not to get booked for the intervention).