ANOTHER SOLID PERFORMANCE BY REDCAR 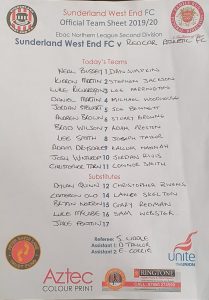 The match was perfectly summed up by fellow ground hopper Glenn Wallace:  “A workmanlike display by Redcar”.

A couple of weeks ago when I last saw them, it was a ‘points over performance’ win.  Last night this was a better performance but only once they got going and that took a bit of time.

There wasn’t much between the two teams for half an hour or so, but overall the game lacked quality, shape and finesse.  In the opening 10 minutes both teams could have scored.

Redcar’s Kallum Hannah had a shot well saved by West End keeper Neal Bussey, while in the 9th minute his opposite number Adam Drysdale got ahead of the defenders, with his header stopped with an instinctive save by Dan Simpkin.  In the 23rd minute Bussey pulled off another good save – diving at full stretch – to deny a Joseph Taylor effort.

Several other attacks by both teams were stymied by offside decisions.

Attempts on goal came in fits and starts:  West End’s Andrew Brown putting a 35-yard lob only just wide, Lee Smith putting a shot over following a strong run down the wing by right back Kieron Martin.

With 10 minutes to go in the half, Redcar’s Adam Preston got himself into a good shooting position after breaking down the right and into the West End box only to be dispossessed by a timely tackle by centre back Jordan Stewart.  He managed to break the deadlock in added time when a back pass to Bussey put West End under pressure, with Hannah knocking the ball to the No. 7.  His first shot was stopped by a great sliding tackle by Martin but the ball bounced back to Preston who had an easy tap in.

Compared to the first half, Redcar took more of a grip on the game, while West End seemed to lose their way.  There weren’t too many highlights of the second half.

Bussey pulled off another agile save in the 49th minute, diving to stop a scissors kick shot by Hannah, while West End’s Brad Wilson wasn’t too far away from hitting the target with an effort from just outside the box.

The visitors doubled their lead on the hour mark when right back Stephen Jackson struck a crisp shot between keeper and post.  They saw out the rest of the game, while West End couldn’t seem to find another gear to launch a fight back.

Five league wins on the bounce for Redcar. 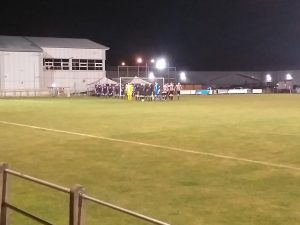