ANYTHING BUT A DOUR RELEGATION BATTLE

A dour, relegation battle involving two teams at the wrong end of the table?  Nope.  Anything but.  One of the better games I’ve seen so far this season; and definitely worth the 180-mile round trip.  Some of the goals were top quality.

Penrith came out of the traps quickly and were 3-0 up within 15 minutes.

In the 5th minute Sean Law just overhit a ball into the Billingham box.  Seconds later he got another chance and didn’t waste it, delivering a perfectly weighted ball through the Town back line, allowing Ryan Errington to get on the end of it without breaking stride and the No. 7 stroked it past keeper Matthew Wilkinson.

Five minutes later, winger Kindsley Grandison was brought down on the edge of the box and the No. 11 took the free kick himself, hitting it perfectly into the top right hand corner of the Town goal. And then in the 13th minute, Luke Brown sent over a near-perfect cross, allowing captain Grant Davidson to meet it with a header that went back across the goal and in.

Penrith could have extended their lead – Davidson with another shot that Wilkinson was able to scoop away for a corner and Max Brown turning the Town defence before hitting a shot into the side netting.  Meanwhile, Billingham were struggling to get any kind of flow into their game and they weren’t getting an awful lot of change out of hitting long, high balls forward.  Three strikes and they could have been down and out.  Instead, the showed character and worked their way back into the game, even if it did take them until around the 30th minute when they started to have their best spell of the match.

And in the 33rd minute they were able to turn that into a goal.  Good work by Alex Bruton down the right ended with him almost losing possession before he managed to scramble it into the box.  Penrith were unable to clear it and Harry Close struck it in.  At 3-1 they had something to build on.

The momentum in the game continued to switch to the visitors.  Bruton continued to put pressure on the Penrith defence down the left and Ashley Lavan had a shot, but put too much curl on the ball, sending it wide of the goal.  They managed to pull it back to 3-2 in the 36th minute.  A ball in from the right byline found captain Daniel Boyle in space and he hit it across the goal.  Penrith keeper Luke Miller managed to get a touch on it but was unable to stop it from bouncing into the goal.

That was as good as it got for the visitors, who were unable to maintain the momentum in the second half, despite some chances and half chances.  In the 47th minute No. 9 Thomas Hinchley was poised to get on the end of a Boyle cross, only for Penrith left back James Metcalfe to get a tackle in.  In the 53rd minute they launched a quick counter attack and Lavan hit a powerful shot that Miller could only parry away.

It was a different matter for Penrith who kept pressing forward and were rewarded with two more goals.  Eight minutes after the break Brown and Mickey Williamson had shots within a couple of seconds of each other and then in the 74th minute they got their fourth goal.  The ball was sent up to Brown who won a tussle with Town No. 5 Oliver James before turning No. 6 Stephen Oakley and stroking the ball past Wilkinson, to complete a well-executed goal.

The match was then sealed in the 78th minute when Grandison took a touch to a Williamson pass and managed to hit the ball through a defender’s legs and into the net, past Wilkinson’s outstretched hands, to seal three valuable points. 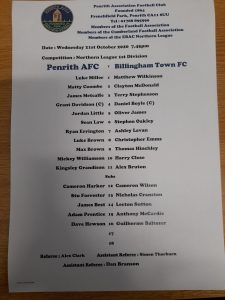 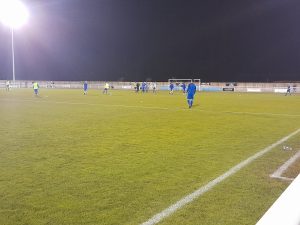 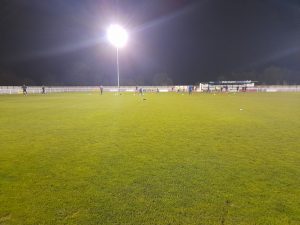