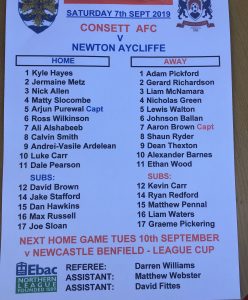 Newton Aycliffe picked up three valuable points with the last kick of the game against 10 man Consett, on a chilly afternoon at the Belle View Stadium.

Consett should have taken the lead after 11 minutes when Andrei-Vasile Ardelean pounced on Liam McNamara’s loose backpass before he squared to Ali Alshabeeb, however the winger could only scuff his effort into the ground to be easily saved by Adam Pickford.

Three minutes later Aycliffe had their chance when Ethan Wood laid the ball off to Alexander Barnes, leaving Kyle Hayes to tip Barnes’ effort around the post.

On the half hour mark, a wicked deflection set up Alshabeeb perfectly for the volley, however Pickford was equal to it to deny Consett a goal.

The first goal of the match came on the stroke of half time, when Luke Carr whipped his free kick towards McNamara, leaving the defender to turn the ball into his own net.

Consett pushed for a second goal and they almost got one when Alshabeed ran onto Carr’s through ball forcing Pickford into a save, before Calvin Smith could only hit the rebound into the side netting.

Despite Consett having all the chances, Aycliffe levelled in the 66th minute when Gerard Richardson’s low cross was turned in by Dean Thexton.

The away side had another chance minutes later, this time through Ryan Redford, however he could only curl his effort wide of the post.

With seven minutes left to go of normal time, Consett were reduced to 10 men when Joe Sloan was dismissed for a two footed lunge.

Four minutes were added on which meant only one thing, a last minute winner.

Shaun Ryder flicked the ball onto Thexton, who then played through Ryder. The midfielder ran onto the ball and rounded the keeper, slotting home in the 94th minute securing a crucial win for the visitors.

Consett will be wondering how they didn’t manage to win the game, however Aycliffe will be happy in claiming a victory and three points. 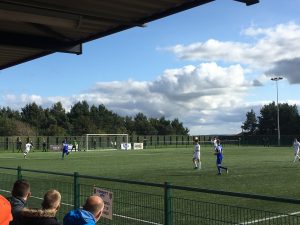