BATTERED – THEN BETTER LATE THAN NEVER 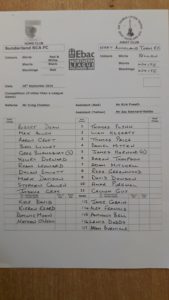 The match kicked off at 3.01.  West Auckland were prepped and ready to go.  For more than 40 minutes they passed and played RCA off the park.  It was one of the new wonders of the world that they were only one goal to the good by the time that RCA decided to start playing.

(At this point, RCA supporters may want to look away.)

RCA keeper Robert Dean saves a Callum Guy shot with his legs.  Thomas Price drives the ball across the RCA goal mouth. Amar Purewal strikes the ball across the goal and just outside the right post. Guy shoots wide right.  A stinging shot by Purewal is pushed out by Dean as he leaps to get his hands to it.  RCA’s Mark Davison heads the ball clear from his goal line from a corner.

A dangerous ball by West right back Liam Hegarty cleared by RCA captain Greg Swansbury, with David Dowson ready to pounce.  RCA’s Aaron Croft makes contact with Purewal – it’s a difficult decision for the ref who decides not to award a penalty.  A three-man move involving Guy, Dowson and Purewal ends with Dean saving a Purewal shot with his feet.

For more than half an hour it was a pleasure to watch West go about their business.  They finally got the goal they deserved in the 36th minute when  Croft fouled Dowson in the area, with the No. 9 scoring from the spot.

What of RCA?  Well, first a bit of context.  They’re just starting to recover from a long list of injuries to senior players and had players playing out of position for this game.  But their first half performance was the worst I’ve seen them play.  That they were still in with a chance when they finally got round to playing some attacking football was mainly down to their keeper and West not turning their superiority into goals.

In the 41st minute, RCA finally mounted an attack, with West keeper Thomas Flynn saving a Stephen Callen shot and a couple of minutes later, Flynn saving a Nathan O’Neill effort and James Harwood blocking a shot by Dylan Elliott.  And then, despite all of West’s dominance, RCA found an equaliser deep into time added on when Callen set Elliott up and the No. 8 put the ball past Flynn.

Perhaps it wasn’t surprising that after the break West couldn’t maintain their outstanding form and RCA couldn’t play quite as poorly.  They even had their chances to win it.

Eight minutes into the second half, O’Neill had two chances to get a shot on target from close quarters, he just couldn’t get his feet set to strike the ball cleanly.  Flynn had to pull off an acrobatic save for a Swansbury header.  RCA’s Henry Dorward, Elliott and Mark Davison were the main driving forces behind their improved play.  Elliott set winger Ryan Leonard away one on one with Flynn only for the No. 7 to hesitate and hit the ball weakly at Flynn.

The game’s final chance fell to Elliott who had a shot of his own tipped over the bar by Flynn.  An hour earlier, it would have been ludicrous to suggest that the game was going to end 1-1.