BIRTLEY GRIND OUT DRAW AT JARROW 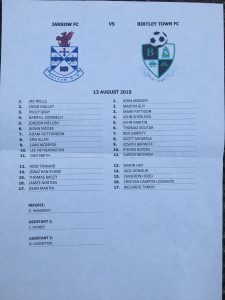 Birtley Town kept their third clean sheet out of three after holding Jarrow to a goalless draw at Perth Green, a game which the hosts should have won in the first half.

The first chance of the game went to Jarrow five minutes in, when Liam McBryde sent Lee Hetherington through on goal, only for his low strike to be saved by Birtley keeper John Mordey.

Jarrow had another chance in the 15th minute when Philip Gray’s cross found the head of Hetherington at the back post, however Mordey pulled off a great save to deny Hetherington and keep the scores level.

The home side went close again to taking the lead when Gray’s free-kick 20 yards out rattled the upright.

Jarrow then had a corner, and Gray’s inswinger found the head of captain Jordon Mellish who was denied from point blank range due to the quick reflexes of Mordey.

Birtley’s first real chance came on the brink of half-time, when Joseph Barwick found himself with time and space on the edge of the box, but his low effort was saved by Jarrow stopper Jak Wells.

In the 58th minute, Gray found McBryde in the box with the striker having time to take a touch and shoot, however his shot was well saved by Mordey.

Midway through the second half, Scott McArdle picked out Steve Aiston in the box, only for the forwards effort to be saved by Wells.

In injury time, McBryde laid the ball off to Craig Malley who turned his man and fired over, hitting the bar in the process.

In a game that Jarrow should have would within the first 45, Birtley will be happy to come away with a crucial point, leaving Jarrow to rue their missed chances.