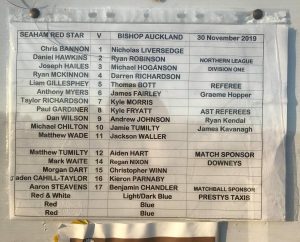 Bishop Auckland came away from The Ferguson Motor Repairs Stadium with all three points after a dominant display against Seaham Red Star.

Bishop took the lead 15 minutes in when a free-kick was played short to Michael Hoganson, who aimed his effort low and into the bottom corner.

Seaham responded a minute later when a long ball forward was flicked into the path of Daniel Wilson, who took the ball down well and placed his effort beyond Bishop keeper Nicholas Liversedge.

Two minutes later, the away side were awarded a penalty when Daniel Hawkins brought down Kyle Fryatt in the area.

Andrew Johnson stepped up and placed his strike into the bottom left corner, restoring his side’s lead.

Bishop hit Seaham on the counter three minutes later, and they added a third, when James Fairley picked up the ball on the edge and lobbed Seaham keeper Christopher Bannon.

After a whirlwind seven minute period of four goals, the tempo of the game slowed as Bishop’s compact shape restricted Seaham to very little chances.

The home side almost pulled a goal back before half-time, however Michael Chilton’s effort was cleared off the line.

The visitors added a fourth in the 54th minute, when Fryatt’s cross was met by the head of Johnson, who directed his header into the far corner.

The second half was not full of so many chances, as Seaham tried to get themselves back into the game.

Seaham did pull one back 10 minutes from time, when Chilton headed in from close range to reduce Bishop’s advantage.

Seaham kept pushing looking to reduce the deficit, but it didn’t prove to be enough as Bishops held on for three points.