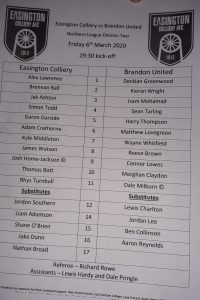 It’s been a long, hard season for Brandon.  Only a 11 point return from 25 games going into this fixture.  But they put on one of the best, battling performances I’ve seen when they came up against Consett in the league cup at home earlier in the season.

That night they lost 5-0 but fought all the way.  They were at it again last night, only this time they got something for their efforts….right at the death.

Having said all that, Easington Colliery should have won.  They were the better team and created the better chances.  The periods they were on top were longer than Brandon’s.

But for the opening 10 minutes, the teams were pretty evenly matched.

Easington took the lead in the 12th minute when Brandon failed to close down right back Brennan Ball who struck a well-hit lob that sailed between keeper Decklan Greenwood’s hands and the bar.

The goal led to Easington gaining the upper hand for much of the rest of the half.  For Brandon, winger and captain Dale Milburn was their liveliest, most nimble player.  In a five-minute spell just after the half-hour mark they had four strikes, although none really tested Colliery keeper Alex Lawrence or the defence – a Matthew Lovegreen shot over the bar, a cross-cum-shot by Connor Lowes, a Reece Brown shot wide left and another shot by the No. 8 blocked by centre back Garon Garside.

At the other end, Greenwood managed to pull off a double save in the 40th minute – racing off his line to save a Rhys Turnbull effort and then tipping a Simon Todd shot from outside the box over the bar.

Five minutes after the break, Easington had more chances to extend their lead.  Greenwood managed to get in the way of a Kyle Middleton shot; James Watson drilled the rebound back towards goal, with Thompson clearing it off the line.

Easington continued to see most of the ball, with the visitors defending deep and in numbers.  An hour into the game, the two No. 10s traded chances – Thomas Bott trying to pull the ball back across Greenwood who pulled off a diving save, and then Morghan Claydon with a header just over the bar.

Easington sub Liam Adamson had the host’s best opportunity to get a second when he slid the ball past Greenwood who had come out of his area, but the No. 14 took too many touches and hit his shot against the back of Brandon right back Kieran Wright.

As we headed into injury time, Brandon had a late surge but looked as though they were going to be unable to convert their pressure into a goal, until…..

Until the fourth minute of time added on.

A loose ball fell to Sean Tarling who rifled it into the net to grab a desperately late equaliser.  The strike was the cue for an 11-man celebration by the Brandon team, with Greenwood running the length of the pitch to join in the celebrations.

Easington had their chances, but, as a neutral, I thought Brandon deserved to get something out of the game. 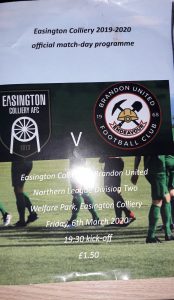