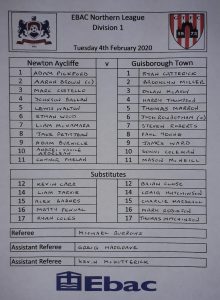 Two teams having very decent seasons.  Both in the top seven, with Aycliffe winning five and losing three in their last eight, while Guisborough have won seven and drawn one since the last time I saw them in the league cup at Tow Law.

That impressive run for the visitors came to a grinding halt last night.

The win meant Aycliffe overtook Guisborough in the league and it was thanks to a better, sharper cutting edge; and the cutting edge came in the form of Adam Burnicle.

He provided a brace with pace.

In the 8th minute, a long ball from the back had the perfect strength to get beyond the Guisborough back four.  Burnicle raced on to it, beating Town keeper Ryan Catterick before the No. 9 rounded him and slid it into the net despite Guisborough captain Josh Rowbotham’s attempt to scoop it clear.

The second came in the 25th minute when Ethan Wood knocked the ball between two defenders, setting Burnicle away, with the striker slipping it under Catterick.  Six minutes later Burnicle was subbed after picking up a knock and the hosts never quite posed the same threat.

They got their third in the 68th minute after contact between Guisborough’s James Ward and Johnson Ballan as the No. 4 ran into the away box.  Referee Michael Burrows awarded a penalty after consulting his assistant and Andrei-Vasile Ardelaean struck it low and right.  They almost got a fourth but Catterick managed to make a fingertips save of a Liam Jarvie shot.  Earlier in the half, the Aycliffe sub had another shot blocked with his body by the keeper.

It wasn’t Guisborough’s night.  They didn’t have Aycliffe’s cutting edge and, particularly in the first 20 minutes, their man with the ball was crowded out by two – at times three – opposition players, giving them no time to get into a rhythm.

For much of the match they couldn’t get the right ball to the right man at the right time.  They also couldn’t manufacture too many clear shooting opportunities in the Aycliffe box.

They played at a quicker pace in the second half and pushed further forward.  Just before the hour mark, a Ward shot took a deflection, forcing Aycliffe keeper Adam Pickford into a diving save.  It was the first of a couple of shots:  Ward sent one effort dipping just over the bar and Sonni Coleman had another shot blocked by Aycliffe captain Aaron Brown.  Their last shot came in the 89th minute when Thomas Marron’s strike from the right hand side of the box was pushed away by Pickford.