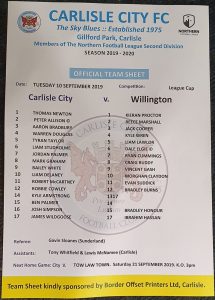 Where to start?  Well, four goals in 11 minutes is as good a place as any.

For the opening 20 minutes or so, it was a game of effort over style.  Neither team was able to stamp its authority on the game; with much of the play being rushed and few moves lasting more than a couple of passes, with decent first touches in short supply.

And then all of a sudden, chances and goals came thick and fast.

Vincent Gash put the visitors ahead in the 23rd minute when the ball bounced into the City area, keeper Thomas Newton went to gather it but Gash managed to get a toe to the ball before he could grab it, knocking it over Newton’s head and then scoring with a simple tap in.

The lead only last three minutes with the first of two quality strikes by City players.  The ball was knocked to the back of the box from a free kick by the right corner flag and left back Aaron Bradbury hit a sweet, first time shot through a bunch of players and past Willington keeper Kieran Proctor diving to his left, providing a perfectly placed equaliser.

In the 30th minute everyone stopped, giving Robert McCartney they chance to hit a 25-yarder, leaving Proctor rooted to the spot.

In between the Carlisle goals, Willington No. 8 Craig Ruddy had a shot cleared off the line by Carlisle’s Kyle Wren.  And then, in the 33rd minute Gash levelled it up with his second of the night. Evan Suddick pushed the ball towards the No. 9 who turned and hit a first time shot into the net.

Unfortunately the second half didn’t continue in the same vein.  In between some short periods of decent play, it was more of the rather scrappy play of the first half, with Willington just about edging it over the 45 minutes.

But in the end, it all came down to one team delivering and finishing off a cross.  Throughout the second half Willington put over a series of crosses that should have caused the Carlisle defence bigger problems, however many were just hit generally into the box rather that the player trying to pick out a team mate to convert the cross.

Carlisle were more precise and it won them the match.

In the second minute of added time, Ben Palmer passed it to Robbie Cowley on the right wing and he sent over a well-weighted cross, presenting No. 9 Bailey White with the chance to grab a late winner, a chance he tucked away from a couple of yards out.

(Two notes – last night was the first fixtures in the new group stage format for the league cup.  It will be interesting to see how well the schedule is received by clubs, players and spectators.

And secondly, it was good to be back at Gillford Park.  The last time I was at the ground was for Celtic Nation’s last game – against North Shields – before they folded.  Then it was a sad, emotional day for Nation, so it’s great to have Northern League football back at the ground.) 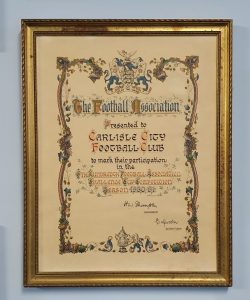 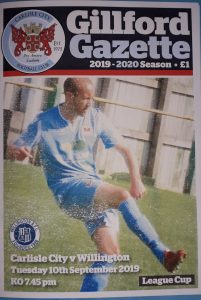