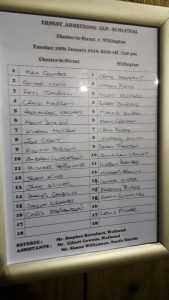 Chester-le-Street are back in the Ernest Armstrong Memorial Cup final – just.

A very thin piece of cigarette paper was all that separated the Cestrians from Willington after 90 minutes of football, and it was just as close in the penalty shoot-out to decide who faced Northallerton in the final.

In between all the twists and turns of the match, there were some noticeable performances, mostly by Chester players, in contrast to the overall team work and play by Willington.

Craig Marron made three excellent last-man tackles and interceptions to deny the always dangerous Dean Thexton and Jonathan Wright.   Alongside him, Alex Walker had an equally solid game against the two experienced forwards.

Meanwhile, Willington left back Scott Oldfield [insert “sinner turned saint” cliché here] cost his team a goal and then saved them with a goal line clearance with only second left in the match.

The game improved with age and until Chester-le-Street got going in the second half, they had keeper Max Coombes to thank for keeping them in the tie.  He made three good saves when one-on-one with a striker

Willington edged it in the first half and played with a bit more fluency.

Fittingly, the best moment of skill in the game opened up the scoring with Thexton jinking round a couple of Chester-le-Street defenders – all of whom looked worried about sticking a foot in, in case they conceded a penalty.  That gave him enough space in the six yard box to pick his spot and poke it in at the near post.

In the second half Chester-le-Street started to play fewer longer balls and focus on shorter passes and more possession.  They also put more potentially dangerous crosses into the Willington box, but most of them were dealt with by the Willington back four rather than testing keeper Craig Hannant.

With just over 10 minutes to go they got their equaliser when Michael Hepplewhite threaded a ball through to Jack Oliver who was fouled by Oldfield just inside the area.  After putting in some crucial tackles at the back, the Cestrian No. 4 stepped up to convert the spot kick.

Both teams opened up their play in the closing 10 minutes and in time added on Josh King almost scored the winning goal, only for Oldfield to block the ball on the line and the game had to be decided by a penalty shoot-out.

Several weeks ago Chester-le-Street were involved in another penalty shoot-out, where the quality of the spot kicks was apparently pretty dire.  This one was of far superior quality – just about every one was hit with pace and placement.  With his final contribution to the night’s play Coombes saved Nathan Plews’ penalty.  Instant Chester-le-Street celebrations were quickly muted when they realised they weren’t home and dry just yet, but Walker sealed his good night’s work by converting his penalty to put them in the final where they’ll go for consecutive wins in the EA Cup.