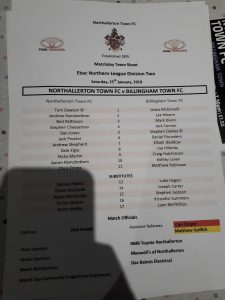 I know it’s a tad early to be talking about Christmas, but here goes.

I may not be persona non grata at Northallerton Town, but I’m getting perilously close to being struck off their Christmas card list.

They weren’t at their best and neither were Billy Town, but the visitors provided the one spark of genius to earn the win.  It won’t surprise anyone that the decisive moment was thanks to Craig Hutchinson.

Out of nothing, the Billy Town No. 9 unleashed a shot from just outside the box straight into the top right hand corner of the Northallerton goal, giving keeper Tom Dawson absolutely no chance of stopping it.

Other than the goal, it was a worthy rather than noteworthy game.  They heavy going (see below) made it a game made for defenders.  Both sets of defenders put in a series of last-gasp tackles and interceptions, meaning that the number of clear cut chances and shots on target were few and far between.

The best of those chances came from Ash Lavan who, in the second minute of added time at the end of the first half, shimmied one way and then turned to the other before getting his shot off – forcing Dawson into a save diving to his right.  Seconds later a Elliott Beddow shot felled his teammate Joe Hillerby in the Northallerton box.

Billingham Town had the upper hand in the second half, with Lavan especially trying this best to find openings to shoot, only to be denied by the Northallerton back four.  In the 87th minute, Dawson bravely dived at the feet of Beddow just as the No. 7 tried to get on the end of a through ball.

For Northallerton, their best play of the half came in the closing 15 minutes, they just couldn’t prise open the Billy Town defence to grab a point.

For the excellent crowd of 320, it was a match of effort and work-rate over stylish football.  Can anyone beat Billy Town in the league?

I’m not too sure it was the right move to tell Peter that, as it’s the only game on, I’ll be coming back for their game against Thornaby in the Ernest Armstrong Cup on February 6.  I might have to try and sneak in under a heavy disguise.

The going was described as “a bit clarty” by Darlington RA secretary Alan Hamilton.  It may not be in the official FA manual , but it hit the nail on the head.

And talking of clarty, the line on the clubhouse side of the pitch was especially clarty, so much so that referee’s assistant Matthew Guffick fought a long-running (and fruitless) battle to try and shake all the mud from his boots.  Cleaning the Augean Stables was probably easier.