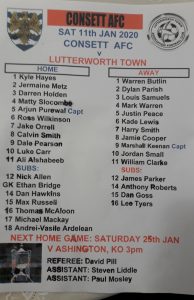 The weather was almost the winner.  Kick off was delayed for an hour to try and allow the gale force winds to subside.  It was a credit to both teams that in atrocious conditions (with heavy rain also pelting down) they were able to put on such a good match.

And a bit of late drama made it all the more of a spectacle.

It took the Steelmen almost half an hour to wrest control of the game, with some spirited play and defending by the visitors.  But once they did, their superior football and technique as well as pace allowed them to take a two-goal lead.

Playing against the wind, Lutterworth put down some early markers – a ball flashed across the goal mouth by Mark Warren and then a 20-yarder by Jordan Small well saved by Consett keeper Kyle Hayes.

Consett No. 10 Luke Carr was the pivot – causing the Leicestershire team most problems with his direct running, pace and astute passing.  In the 31st minute they started to make headway, first with a Jake Orrell shot deflected for a corner, a Carr shot, a Dale Pearson free kick over the bar and then a shot wide of the goal.

Their pressure paid dividends in the 37th minute, with Carr breaking the deadlock with a shot from outside the box, hit with placement and power to send it past Lutterworth keeper Warren Butlin.

They closed the half with more chances – several for Calvin Smith and another one for Orrell.  They were denied a second by a save by Butlin and a block close to his own goal line by Justin Peace.

In the 54th minute Lutterworth were themselves denied a goal when captain Marshall Keenan hit what looked a sure fire goal, only for Hayes to pull of a save.  That was matched at the other end, with Butlin able to stop another Pearson shot.  Minutes later the Consett No. 9 had another effort saved but Consett got the crucial second goal in the 61st minute.

Left back Darren Holden played a one-two at pace with Pearson which allowed Holden to race forward and chip the ball over Butlin, with a deft finish.

Just as Lutterworth looked as though they were running out of energy and ideas, they got themselves back in the game.  Hayes, kicking against the strong wind, produced a kick out that went straight to Keenan who passed the ball to Small who in turn managed to turn past the Consett defence only to be brought down by Hayes.  Kade Lewis struck the penalty strong and true to make it 2-1.  The spot kick made the game more “interesting” than it should have been.  Consett nerves started to jangle and for a few minutes, a couple of mistakes crept into their game.  With 15 minutes to go they started to re-assert themselves with shots by Pearson, Carr and Smith, with Pearson’s chip shot cleared by Lutterworth’s Jamie Cooper close to his goal line.

Consett finally sealed the win and settled the nerves in the 86th minute.  A long ball released Pearson who broke down the left, with huge gaps left in the Lutterworth defence as they pushed men forward looking for an equaliser.  Unselfishly, Pearson drew Butlin and a defender towards him before passing it across to Ali Alshabeeb who had the simple task of prodding it home to make it 3-1.

Wembley moved just that little bit closer for Consett.  Congratulations also to Hebburn Town and West Auckland who join them in Monday’s draw, but commiserations to Stockton Town who fell to a lone goal at home. 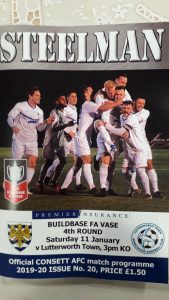