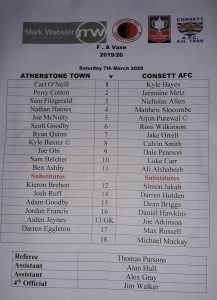 Good things come to those who wait.  Yesterday good things came Consett’s way.  They had to wait a week to play their quarter-final tied against Atherstone and they had to wait before being able to stamp their authority on the game.  Once they did, there was only going to be one winner.

For just over an hour it was more nervous for the Steelmen than it should have been.  They got off to a blistering start with chances for Jake Orrell, Dale Pearson, Ross Wilkinson and Matty Slocombe, all coming to nothing with saves by home keeper Carl O’Neill and some wayward shooting.

They fell behind in the 10th minute after twice failing to clear a corner.  A loose ball was pounced on by their No. 7 Ryan Quinn who fired it low into the corner of the net.  They scored with their first shot on goal.

The action was fast and furious.

Consett keeper Kyle Hayes punched away a dangerous, in-swinging corner close to his left hand post, Luke Carr had a free kick skim close to the Atherstone goal, Carr then latched on to a mis-kick by O’Neill.  Carr’s shot came back off the post but spun away from Pearson before he could put it into the net.

Playing against the wind, Consett struggled several times to get distance on their defensive clearance and allowed the ball to go over their heads.  In the 24th minute they came close to conceding a second when left back Sam Fitzgerald (who was their best player) hit a right foot shot that hit the post.  Thirteen minutes later Atherstone were lucky not to have a man sent off when captain Kyle Baxter led with his head in a confrontation with Slocombe, with the Atherstone player nudging his head onto the Consett player’s forehead.  Referee Thomas Parsons pulled a red card out of his pocket but then changed his mind and booked Baxter instead.  It was a lucky reprieve.

As the first half closed, both sides had chances.  Hayes was able to punch away an Atherstone free kick that bounced just in front of him and then Pearson tried to chest an Orrell cross into the net from 10 yards out, with the goal gaping, only to put it wide.

Consett controlled most of the rest of the game, restricting Atherstone to a handful of chances, while the chances kept on coming for the Steelmen.  Orrell had a shot punched away by O’Neill, a lob by Pearson bounced off the top of the bar.

Within seconds the game saw two crucial incidents.  In the 61st minute Atherstone launched a quick break and a shot was saved with his legs by Hayes.  It was a pivotal stop.  Consett launched a counter attack and right back (and man of the match) Jermaine Metz was given time and space to thread a shot through the crowded penalty area and just inside the left hand post.  1-1 and Consett had got the equaliser they deserved.

In the 70th minute a quick one-two involving Pearson and Carr opened up the Atherstone defence, with O’Neill again on hand to save Pearson’s shot.

In the 83rd minute they squandered a great chance to seal the game when an attack saw them have four attackers up against two defenders, only for Carr to hit his shot against an Atherstone player and then Pearson send the loose ball over the goal.  With three minutes to go, Carr had another shot pushed away by O’Neill diving down to his right.

Extra time beckoned, and it was time for Consett No. 8 Calvin Smith to shine.  Up until then he’d had a relatively quiet game.  That was all about to change in dramatic fashion.

He had one header cleared off the line by Atherstone right back Perry Cotton and then in the 100th minute he got on the end of a Metz cross to deliver a header that sailed past O’Neill to put Consett ahead for the first time in the match.

Victory was sealed four minutes later.  Carr sent over a corner, with Smith judging his run to perfection to glance another header into the net.  In the second period of extra time he almost completed his hat-trick.  A wayward clearance by O’Neill from outside his area fell to the No. 8 who tried an audacious lob from 40 yards out, with the ball bouncing off the top of the bar.

It was the last kick of the game and Consett had delivered a famous victory to see them through to the semi-finals of the Vase.

A couple of notes to end with:

The win was particularly sweet for one man.   It was Consett chairman Frank Bell’s birthday.  He couldn’t have hoped for a better gift.

There was a terrific turnout by the Conny Army, with four buses and plenty more cars making the journey to the Midlands.

And finally thanks to Atherstone for their hospitality.  As a second division club, they have had a fantastic run in the Vase. 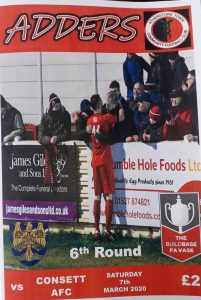 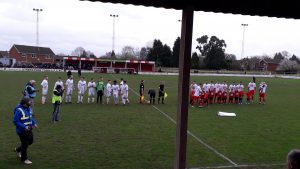