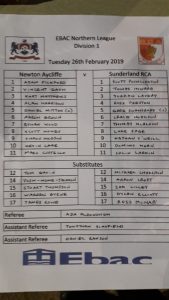 Both sides dodged a bullet in this game.  The only problem for Newton Aycliffe was that RCA still had another bullet in the chamber.  It hit the bullseye a couple of minutes into time added on when a draw looked a certainty.

In the 9th minute their keeper Adam Pickford pulled off what appeared to be a terrific save from a Colin Larkin shot.  RCA were adamant that the ball had crossed the line, but the referee’s assistant clearly had a very unclear view of the incident and referee Asa McDonough waved play on.

Skip forward to the 67th minute and it was RCA’s turn to be fortunate when a decision went their way.

Only minutes before I was chatting to Northern League stalwart Keith Stoker about how RCA keeper Scott Pocklington had managed to curb his habit of racing unnecessarily out of his box – a habit I’d seen first hand in the last two games I’ve watched them.  I spoke too soon.

A long ball through to Aycliffe No. 9 Shaun Hudson allowed the striker to take it round Pocklington who, once again had come out of his box, only to fell Hudson, denying him what looked a very decent scoring opportunity.  He was lucky in the extreme to just get booked.

The third bullet was fired in the second minute of added time.  A move down the RCA left allowed Colin Larkin to cross the ball to Luke Page.  His header hit the post, but the ball fell back to him, giving him a second chance to score and the No. 8 booted it in.

It was harsh on Aycliffe, who’d done enough to earn a share of the points.

In between all of that, there were compare and contrast elements to the game.

The contrast came in the two teams’ passing games:  Newton Aycliffe manager Colin Stromsoy has only been in charge for a couple of games but there are already a few hints of the style he brought to Team North’s play:  short, quick passes with one, or at most two touches.

For their part, RCA adopted a longer range of passing for most of their attacks, with a series of balls into the box, mostly from the left wing.

There was nothing to separate two incidents In the closing stages when it was No. 12 v No 12 and No. 3 v No. 3, with the defender coming out on top on both occasions.

A quick move by RCA’s Nathan O’Neill and Larkin set Michael Charlton on his way with a clear run at goal, only for Aycliffe’s Tom Gavin to produce a potentially goal saving tackle from behind.  Two minutes later at the other end Kurt Matthews beat the RCA offside trap and was just about to shoot when Jordan Lavery produced a tackle just as good as Gavin’s to snuff out the danger.

That looked as though it was going to be the last of the action, until Page’s late, take two strike and winner.