EASINGTON UP THEIR GAME 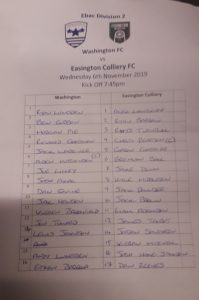 Helped by a red card

To be honest, the first half wasn’t great.  Fortunately for the spectators, things improved in the second half and the game shifted decisively Easington’s way.

For the opening 45 minutes there was a brisk pace to the match, but attacking moves by both sides regularly broke down as they approached the 18 yard box.

They both had two decent chances to take the lead, but couldn’t convert them.  Washington’s Jak Hanson set Kieren Broomfield up with an excellent through ball, leaving the No. 11 one-on-one with Easington Colliery keeper Alex Lawrence who managed to block Broomfield’s shot with his body after rushing out of the box.  Lawrence presented the hosts with their second opportunity:  scuffing a clearance straight to Dan Quine, but the Washington No. 9 slipped just as he was about to shoot with the goal gaping.

For Easington, Liam Adamson had a shot saved by Washington keeper Ryan Lumsden and captain Chris Pearson’s first time, curling shot went just a foot or so over the bar.

As soon as the second half started, Easington looked more positive.  They had three shots in the opening five minutes, the only trouble was they were all well off target.

In the 62nd minute Kyle Middleton beat the offside trap, with his shot well saved by Lumsden, and Jack Pounder unable to get a clean connection with the rebound.

Three minutes later Washington’s Jack Warriner was sent off for a second yellow card and only a couple of minutes after that, Easington broke the deadlock thanks to a goal by Jack Brown who broke past Washington’s back line to place the ball past Lumsden.

Easington continued to pile on the pressure and in the 83rd minute Adamson had a shot cleared off the line by Washington captain Aiden Hutchinson.  Down to 10 men, gaps started to appear at the back for Washington and in the last couple of minutes of the game they conceded two more goals.

In the 85th minute Kieran Mitchell had the chance to hit the ball first time but decided to take it round a defender and was able to slot it in.  And with the last kick of the game, Adamson fired the ball into the goalmouth from the byline and it was deflected in off a Washington defender.