EMOTION AND DEFEAT FOR BENFIELD 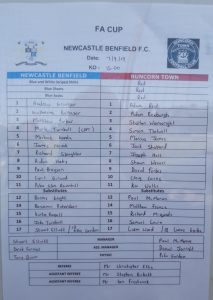 At the end of the week in which their chairman Jimmy Rowe died, this wasn’t the result Benfield were hoping for.

It was an emotional day – the junior teams round the centre circle for a minute’s applause; a floral tribute; his grandson as mascot for the day; and then the players, officials and spectators taking part in another minute of applause to mark his passing.

Everyone at the club would have obviously preferred a victory to complete the day.  It wasn’t to be, despite taking the lead after conceding an early goal.

Shaun Weaver put the visitors ahead in the 12th minute.  Team mate David Forbes let a long cross from the right go past him and go on to Weaver.  He pulled the ball across the box and the whole Benfield defence along with keeper Andrew Grainger moved left, leaving a gaping hole and an easy finish for the No. 8.

Benfield had a close shave in the 22nd minute when Runcorn No. 10 Craig Cairns had a shot come back off the post.  At the other end Paul Brayson hardly had a touch, with Runcorn’s attackers posing more problems than their Benfield counterparts.  Benfield’s main attacking threat was right back Guilherme Baltazar.

However, Benfield were level in the 37th minute.  Mechack Kanda found Baltazar with a ball half way into the Runcorn half.  The No. 2’s cross was miscued by Brayson, the ball came to Peter Glen-Ravenhill who hit it over the keeper and in.

Two minutes later they took the lead – thanks to Glen-Ravenhill with his second.   James Novak threaded a ball through the Runcorn defence and the No. 11 applied a crisp finish.  Somewhat against the run of play, they went into the break ahead.

Runcorn threatened to draw level two minutes after the break.  Grainger fluffed a cross but then managed to get his body in the way of two shots in quick succession by Cairns.  Minutes later it was all square after a massive error by Mark Turnbull.  He allowed the ball to slip under his feet, Cairns pounced and passed it across the box – giving sub Richard McQuade a simple tap in.

In a torrid six minute spell, Glen-Ravenhill should have scored when Brayson back heeled the ball to him, only for the No. 11 to put his shot wide left with Runcorn keeper Adam Reid leaving a gap to his right.

The decisive goal came in the 71st minute when Runcorn captain Simon Thelwell sent a through ball to Cairns  and his first time shot went over Grainger and in.

Benfield came within inches of grabbing and equaliser when Turnbull met a cross by Richard Slaughter with a header that just skirted wide left of the post.  For the last 10 minutes Runcorn relied on quick counter attacks while Benfield applied more pressure but they couldn’t find a way past the visitors’ defence. 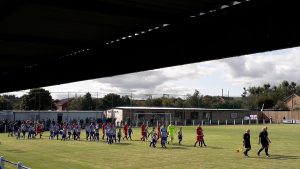 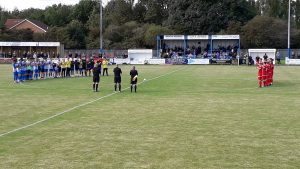