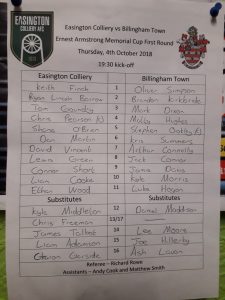 It may not have been Tuesday’s goal fest, but last night’s Ernest Armstrong cup tie between Easington Colliery and Billingham Town provided a hugely enjoyable game.

Among the key factors were:

It was goalless at half-time but it was anything but a dour struggle.

Billingham Town were out of the blocks quicker than Easington with an Arthur Connelly shot spinning just wide of the post and Jamie Davis tackled by Dan Martin just before getting a shot away.

Connelly in particular was making some decent runs down the right, so much so that Easington had to bring Tom Goundry back to help Shane O’Brien mark him after the Easington No. 3 had spent the early part of the game further up the pitch.

For the first 20 minutes Easington had a couple of attacks but they all broke down around the edge of the Billingham box.  In the 26th minute Easington’s Ethan Wood produced the best shot of the game so far, forcing Town keeper Oliver Simpson into a save diving to his right.

Billingham’s best chance came just before half-time when a corner ball was only partially blocked by the Easington Colliery defence.  Mark Dixon was quickest to react and his shot was acrobatically saved by home keeper Keith Finch, diving at full stretch to his left.  No goals, but there’d been plenty to enjoy.

The goal drought didn’t last long.  In the first minute of the second half Finch came for the ball only to fumble it and as it came clear Ash Lavan was on hand to score.

Within two minutes of that goal Easington had equalised.  Ryan Lincoln Barrow drove into the Billingham box and tried to shoot but the ball re-bonded off Dixon.  Lincoln Barrow was given a second bite of the cherry and he hit a high strike over the out-stretched arms of Simpson.

Over the next 20 minutes there were chances and shots at both ends.

For Easington Wood at full stretch was just unable to connect with a cross to the far post, Chris Pearson come close with a header and Wood with another effort just over the bar.

For Billingham Town Lavan produced a great turn to get past the Easington centre backs but Matty Hughes recovering just in time to put in a sliding tackle and clear the danger and then Daniel Maddison tried a first time flick shot but he couldn’t get it past Finch.

Easington should have done better when they conceded the second goal. They failed to get anyone close to a long throw into their box.  It bounced over Lavan but bounced kindly for Maddison whose header skipped over Finch and in.

Finch’s quick reactions saved them from going further behind in the 74th minute when Maddison put Connelly through for a clear run at goal.  Finch rushed out to block Connelly’s shot.

For all their effort in the last 15 minutes, Easington couldn’t craft an opening to get an equaliser and the win was sealed in the 89th minute when a cross hit an Easington player and Lavan got his second of the night to send Billingham Town into the next round.