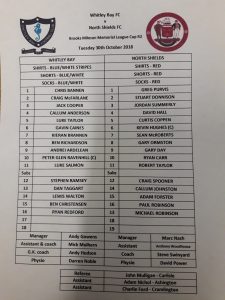 There was a surprisingly subdued atmosphere at Hillheads in the lead up to this usually keenly fought local derby between Whitley Bay and North Shields.

But a fast and furious start soon livened things up.

North Shields were the first to push on the accelerator, with winger Sean McRoberts sending over a couple of dangerous crosses.

Next up was Whitley winger Luke Salmon who made a surging run through the Shields defence before his shot was parried by keeper Greg Purvis.  That shot was followed up by Bay captain Peter Glen Ravenhill who was denied a goal by Gary Ormston throwing himself to block the effort.

Three minutes later and Shields No. 10 Ryan Carr hit a perfect pass with the outside of his right boot to set Gary Day up.  His well-hit strike hit the post and came back out for Ormston who forced a good save out of Bay keeper Chris Bannen.

Apart from all the shots, there were a host of excellent long passes being sprayed around the pitch by both teams.

Twenty three minutes in and Day came close for a second time.  Full back Jack Donnison made a lightning quick break down the right with former Robin Ben Richardson making a diving block to deny Day and send the ball out for a corner.  Ormston met the corner with a header which was heading in until right back Craig McFarlane managed to kick it off the line.

Richardson made them pay for failing to hit the net when he took a free kick on the edge of the box and managed to find the tightest of gaps between the post and Purvis.

Things then started to get feisty between the players, with referee John Mulligan doing a good job in preventing the game from getting out of hand.  As for the players, neither team had any thought about slowing the game down.  As soon as they got the ball, attacking seemed to be the only thing in their collective minds.

Whitley Bay went into the break two goals up after Callum Anderson rode a tackle before passing the ball to Glen Ravenhill who in turn hit it across the goal for Salmon to thump it in from a couple of yards out.

The second half was just as fast but not as furious as the first, with fewer chances at either end.

Glen Ravenhill had a go from 30 yards out, forcing Purvis into a save, diving at full stretch down to his right.  At the other end North Shields came desperately close to scoring again when a Carr header was instinctively saved by Bannen who was in the right place at the right time.

For Whitley Bay, Kieran Brannen ran past three Shields defenders to get himself one-on-one with Purvis but he couldn’t get his shot past the keeper and then substitute Ben Christensen had a shot deflected by Donnison, with the ball almost spinning into his own net.

The chances then started to dry up for Shields and both defences were able to prevent any further chances until Andrei Ardelean hit the side netting with a shot in the first minute of added time.