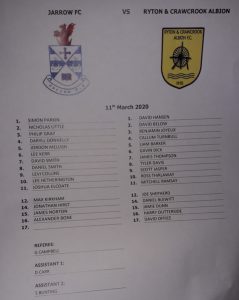 The first choice for last night was the cup tie at Guisborough.  An accident leading to the closure of the A19 scuppered that.  Just enough chance to turn round to make it to second choice:  Heaton Stan.  The postponement alert for that came through en route.  Option three:  Benfield.  Cars coming away from the ground as I’m pulling up is not a good sign and notification of the postponment comes through as I’m parking up.  Option four:  Jarrow.  I arrive just in time to be informed that there’s a pitch inspection 20 minutes before the scheduled kick off at 7.30.

Fate then took a positive turn – the game’s on, with the kick off put back 15 minutes.  Fate then took an even more fortunate turn.  For the second time on the trot, it’s a really good game at Jarrow, with the crowd – huddled in the stands against the wind and rain – are entertained with a brisk, open, attacking match.

We didn’t have to wait long for the first action.

In the first minute Jarrow right back Nicholas Little produces a goal-saving sliding tackle to intercept a James Thompson cross with two Ryton players ready to pounce.  Jarrow launched an immediate counter attack, converted by No. 9 Levi Collins to make it 1-0.

The attacks kept on coming.  Twice Jarrow’s David Smith and Lee Hetherington combined well down the right to set Collins up, with both shots well saved by Ryton keeper David Hansen.  At the other end Ryton No. 8 Tyler Davis hit a free kick just wide of the goal.

Jarrow double their lead in the 32nd minute when a corner goes over Collins but is just right for Daniel Smith to rifle the ball home.  Ryton came close to scoring in the 38th and 40th minute:  Parkin couldn’t hold on to a Callum Turnbull free kick but he managed to flick it away just before a Ryton player can get to the loose ball.  The keeper then manages to push away a Mitchell Ramsay curling shot which is heading for the top left corner of the goal.

Ryton conceded a third in the 42nd minute when their defence, trying to play the offside trap, are caught square and flat-footed.  Hetherington ran through.  His first shot was blocked by Hansen but the No. 10 then managed to pick up the rebound and slot it between the keeper and a defender.  At half-time, Jarrow had made the most of their chances, but it was tough on Ryton to be 3-0 down.

The second half wasn’t quite as lively, not helped by driving wind and rain.  Ryton made the better start to the half.  Sub Daniel Blewitt’s first touch was a shot which forced Parkin to make a save diving to his right.  It took Jarrow a bit to pick the pace back up but within three minutes they hit the post twice.  In the 58th minute David Smith shrugged off a challenge by Benjamin Joyeux before hitting a shot that ricocheted off the right hand post.  In the 61st minute Hetherington broke down the left, passed the ball back to Lee Kerr and his shot, from outside the box, hit the left hand post.  Seconds after that, Collins chipped the ball on to the roof of the net.  Their other best chance fell to Joshua Elcoate who had a shot saved by Hansen with his outstretched hand.

Ryton had fewer chances in the second half.  Their approach play was good enough, but moves fell down in and around the Jarrow penalty area.  A Ramsay lob in the 63rd minute went just over the bar and with eight minutes to go, a Gavin Dick effort was punched away by Parkin.

It was a confident display by Jarrow, while Ryton’s promotion push continues to falter.

And finally, returning to the theme of fate taking a kindly turn, there was one other fortunate side to last night’s game.  With the rain pouring down, the covered standing area was fuller than usual, and the location for some highly entertaining banter which ranged from Teletext, Twitting (sic), Geordie Jeans (for people of a certain age) and sports mixture sweets.

The linesman was given a running commentary too:  “Put your flag down.  Put your flag up.  Join in.  Do you want a sports mixture?”  And the quote of the day:  “He’s been to more games than me, and I haven’t missed a game.” 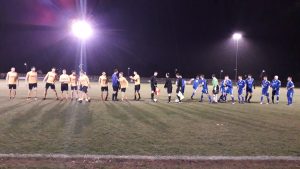