FIVE GOAL SECOND HALF FOR SYNNERS 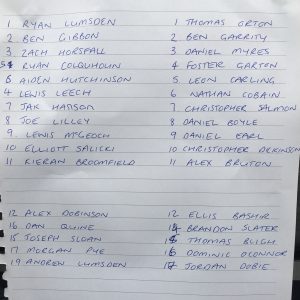 A second half rout from Billingham Synthonia ensured they left New Ferens Park with all three points as they defeated a poor Washington side.

Billingham had the first chance of the game when Christopher Salmon’s effort was hit straight at Ryan Lumsden.

The away side went close again in the 26th minute, when Christopher Dickinson’s strike from the edge of the box hit the bar and went over, much to Washington’s relief.

Washington were awarded a penalty in the 32nd minute, when Ellis Bashir brought down Ben Gibbon in the area.

Lewis McGeoch stepped up and missed the chance to give Washington the lead, as he smashed the ball off the crossbar, before the visitors cleared the ball away.

The game was goalless at the break, in what was a fairly dull first half for both teams.

Billingham were awarded a penalty in the 54th minute when Gibbon brought down Alex Bruton in the box.

The away side doubled their advantage just after the hour mark, when Ben Garrity tapped home after a scramble in the box from a corner.

With 15 minutes left on the clock, Billingham added a third Earl ran onto a through ball before slotting into the bottom left corner.

Billingham continued to press, and it paid off in the 83rd minute, when Bruton’s pull back was turned home by Earl to complete his hat-trick in his first game since resigning for the club.

Billingham scored their fifth four minutes from time, when Salmon laid the ball off to Brandon Slater, before he coolly slotted home to wrap up the victory.

After a disappointing first half, Billingham deserved all three points as they blew away a Washington side who struggled to make an impact on the game.