FROM EDEN TO PARADISE 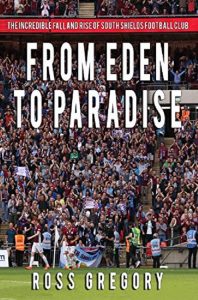 Ross is head of sport for the Sunderland Echo, Shields Gazette and Hartlepool Mail. From Eden to Paradise chronicles the fall and rise of the club.

It tells the story of a club who had mixed it with Manchester United and Chelsea in its heyday but who came within months of extinction, only for a chance encounter with a former fan turned businessman to set them off on another incredible journey.

South Shields Football Club has had a rich and colourful history. For more than a century there has been a football club operating in the North East coastal town, sometimes amateur, sometimes professional, never without controversy.

In 2013, however, the town lost its club – 125 years after the first recorded public appearance of the original team. They had no home, no ground and seemingly no hope.

But a special band of volunteers refused to let their club die. Begging and borrowing, they somehow kept the Mariners alive, persuading players to make a 50-mile round trip to a dilapidated ground despite playing in front of just 12 paying supporters at times at Eden Lane in Peterlee.

Ross talked to the men behind the stunning transformation: the retired pensioners who spent days up ladders fixing a ground; the Argentinian football star who fell in love with the club; the millionaire businessman who saved a historic club from extinction.

The men who helped a lost club find paradise.

The book is published on October 8 by Britain’s Next Best Seller (RRP: £14.99) and is available via the author, The Back Page and Amazon. To order your limited edition signed copy call 07739 300613 or email ross.gregory@hotmail.com  A Kindle version is also available.