GAME WITH A GOAL OF THE SEASON CONTENDER 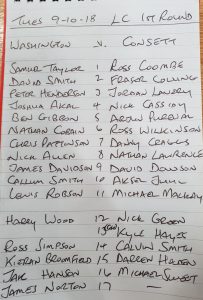 A couple of weeks ago I was at the Washington for their Durham Challenge Cup game against Esh Winning and, to be honest, it wasn’t too great.

Last night’s League Cup game was much better fare.  They played better and played their part in a match that had a good pace to it as well as some excellent goals – including a goal of the season contender.

Consett fully deserved their win and, especially in the first half, played with fluency and speed; but it was a closer game than many might have expected.

Washington conceded an early goal and were under the cosh for the opening 20 minutes when they could have been down by four or five goals.  The goal came in the third minute when Washington keeper Samuel Taylor couldn’t hold on to a Aksel Juul shot and spilled it to Michael Mackay who only had to stick out a foot to nudge it over the line (albeit with a hint of offside to it).

After that Consett sent over a series of crosses, mainly from the right, but the front men couldn’t connect with them.  Their perseverance finally paid off in the 21st minute when David Dawson’s cross was met by Mackay who got on the end of it to make it 0-2.  He almost got his hat-trick in the 25th minute when he tried to squeeze a shot in at the near post but Taylor managed to tip it away for a corner.  Consett’s attacking pace continued to cause problems for the Washington defence.

Against the run of play Washington’s right winger Chris Pattinson scored a little cracker of a goal in the 29th minute.  The No. 7 ran across the 18-yard line with Consett defenders standing off him, he saw a tight gap and planted the ball just inside the post with a well struck shot.

At the other end the Washington defence were playing their part in making sure that the kept within striking distance of their first division rivals.  Joshua Akal produced a well-timed tackle in the box to block a Danny Craggs shot, Ben Gibson got in the way of a Dawson shot and Ross centre back Ross Wilkinson fired a shot through a forest of legs only to be denied a goal by Taylor diving down to his left.

It was the first of a hat-trick of diving saves by Taylor.  In quick succession he got the better of two shots by Dawson – all diving to his left.

Washington got off to a confident start to the second half, with Consett playing in their comfort zone, albeit a step off the pace of their first half play, It was the Steelmen who extended their lead on the hour mark when Mackay had a couple of chances to have a shot but eventually decided to pass to Danny Craggs who scored with a precise finish.

The goal didn’t seem to dent Washington’s confidence and they continued to pass the ball around well and Nick Allen had a shot stopped by Consett Ross Coombe, but they fell further behind a couple of minutes later.

Calvin Smith had a measured shot come back off the post and then seconds later Craggs lobbed Taylor to make it 1-4, but the best goal was yet to come.

Allen almost made it 2-4 when he produced Washington’s best shot of the half, forcing Coombe into a save at full stretch.   Less than a minute later he produced an absolute belter of a goal:  spotting Coombe off his line, the Washington No. 8 tried an audacious lob from 40 yards out.  The ball seemed to spend an eternity in the air before going in off the right hand post as Coombe scurried back to try and clear it.

It was a quality strike that put the finishing touches to a game in which the second division team should have a lot of pride in their performance.