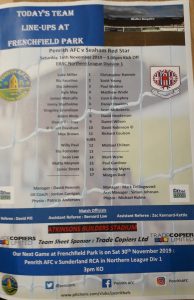 Where to start?  Well, there were a couple of goals – the second rounding off one of the best bits of football of the game.  There was plenty of effort and graft.  What it lacked was precision in many of the passes and crosses by both sides.  And what it lacked was a spark of creativity.  Much of the play was too predictable.

In the 50th minute Red Star captain David Robinson sent over a cross from the right.  Dan Wilson managed to get a yard or so of separation from a Penrith defender, managed to head the ball goal-wards, but it seemed to take an age to finally nestle in the net just inside the right hand post.

For most of the game neither team managed to get behind the back four.  The equaliser proved to be a rare exception.

Penrith substitute Sean Law produced the pass of the game to bisect the Red Star defence, allowing Max Brown to latch on to the ball and calmly chip it past Seaham keeper Chris Bannon who’d come racing towards him to try and close the shooting angle down.  It earned him the Man of the Match award.

Overall, Red Star might have just edged it, but there wasn’t much in it.  The visitors started better, the Bonny Blues finished the stronger and could have nicked a winner in the closing minutes.  In between, it was a battle between the two penalty areas, with not too much goalmouth action.

In the 15th minute, Penrith’s Kingsley Grandison hit a dangerous free kick into the heart of the Seaham box, with Kyle May putting a header just wide.  The free kick was even appreciated by Red Star manager Mark Collingwood with a “good ball”.  Five minutes later he was urging his players to do better:  “We need to improve in every area.”  It could equally have applied to Penrith.

In the 28th minute the visitors came close to taking the lead.  Richard Coulson had a shot blocked by Penrith right back Ric Faustino and then seconds later Robinson had a shot hit the bar.  In the 39th minute Robinson latched on to a long kick out by Bannon, hitting a half volley across the face of the Penrith goal.

The second half was littered crosses that failed to find their man in the box and shots that didn’t really test either Bannon or Penrith keeper Luke Miller.

In the first minute of time added on, Brown had a chance to snatch a win.  Jonny Studholme found No. 9 Shaun Gardner who in turn passed it to Brown, only for the No. 11 to pull his shot wide.

I don’t think either camp will have too many complaints about the draw. 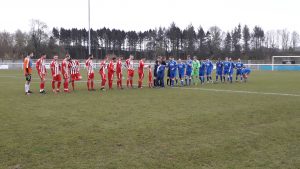 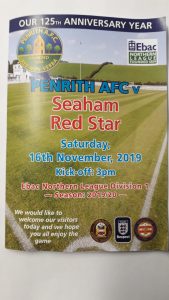