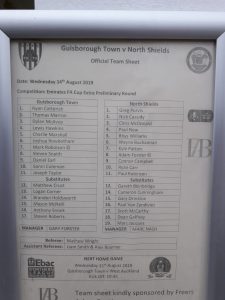 Sometimes it’s a real pleasure just to stand and watch a really good game unfold.  This FA Cup replay wasn’t a classic, but it was a game full of attacking enterprise and pace, decided by one excellent cross.

And just like the previous night’s game between the two Ryhope teams, there was a penalty miss thrown into the mix as well.

The decisive cross came in the 79th minute when two substitutes combined to craft the winner.  Anthony Snook – on for injured left back Dylan McAvoy – swung in a perfectly judged ball to the far post, with Steven Roberts on hand to head it in.

The goal should have given the home club a welcome breathing space, having been awarded a penalty in the 18th minute, only to have been thwarted by a tremendous double save by North Shields keeper Greg Purvis.

Sonni Coleman was bundled over in the box and he stepped forward to take the spot kick, hitting the ball low down to his left.  Purvis guessed right and pushed the ball away from the goal, giving the Guisborough No. 10 another chance to strike, with Coleman denied by a second good save by Purvis, a save which in turn was followed by the ball being hacked away by a defender close to the line.

It was the highlight of a first half that had started at a good pace, with both teams looking to attack, with neither giving the other much time and space.

North Shields’ best chance of the half came in the 38th minute when Rhys Williams met a corner with a powerful header.  Guisborough midfielder Steven Snaith was on the line to clear the ball.  It was the last moment of note in the half where the only surprise was that it ended goalless.

Twenty minutes into the second half saw North Shields start to take the initiative, helped in part by Guisborough’s inability to hold on to the ball, but the visitors couldn’t find a way to seriously trouble keeper Ryan Catterick.

For the rest of the game, both teams fought hard to create a decisive opening.  It came in the 79th minute with  Snook’s cross.

Both teams played their part in putting on an entertaining match for 304 spectators.  Guisborough probably just about deserved to win, although there wasn’t much in it at all.