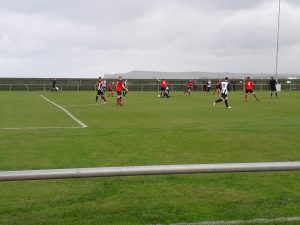 Northallerton Town somehow managed to turn what should have been a comfortable win into a draw.

Redcar Athletic somehow managed to find their attacking spark with just over 20 minutes of the game to go.

There were a lot of scratching of heads going on in Green Lane at the final whistle yesterday.

Northallerton squandered a bagful of chances and were left to suffer the consequences for not extending their one-goal lead.  They were clearly the better side on the day.  It was a bit of a smash and grab raid by Redcar who made the most of their limited scoring opportunities.

Northallerton started the game by creating most of the openings.  Not much changed for the rest of the match, so it was a bit of a surprise that it was the home team that took the lead in the 16th minute when Adam Preston knocked a free kick sideways to Gary Wood who hit a sweet shot with the outside of his left foot to beat Northallerton keeper Thomas Dawson.

The visitors could have levelled twice in two minutes of the re-start with Nick Martin within inches of connecting with a Richard Walker cross and then Walker seeing David Abel produce a diving block to get in the way of a shot.

In the 25th minute Redcar No. 1 Will Lawrence pulled off two good saves for Martin and Aaron Ramsbottom efforts.   Martin finally converted their superiority and grabbed a well-deserved equaliser in the 27th minute.

At the other end Dawson was able to push away a couple of Preston shots in the 39th minute.  The final chance of the half fell to Martin who had a shot on target deflected for a corner.

Northallerton had played the better football and Walker was the best and most creative player on the pitch.  That trend continued in the second half and they took the lead in the 51st minute when Ramsbottom ran at the Redcar back four, pulling players towards him and freeing Kerry Hedley who made the most of the space, cut back inside a Redcar defender and put it past Lawrence to make it 1-2.

They came closest to getting a third in the 56th minute when Chris Emms’ first time shot hit the bar.

Northallerton kept piling on the pressure – looking well organised when defending and lively when going forward, while Redcar were finding it difficult to get their passing game going.

Walker should have scored in the 65th minute when he rounded a couple of defenders and slotted it past Lawrence, but missed the target.

Then, in the 71st minute, Redcar woke up – converting the first real chance they’d created for quite some time.  Preston burst forward and round Dawson and hit his shot across the Northallerton and into the net.  Two minutes later Athletic captain Michael Woodhouse came close to getting a foot to a Jashua Heathcock cross right in front of the Northallerton goal.  It would have been daylight robbery if he’d managed to score.

In the end, they had to settle for a draw.

PS:  In a biting and brutal wind blowing in from the North Sea, it was a credit to both teams for how they played.  Most sensible spectators huddled in the stands.  Only a few brave souls ventured to the sidelines to watch the game.  It was a bit brisk.