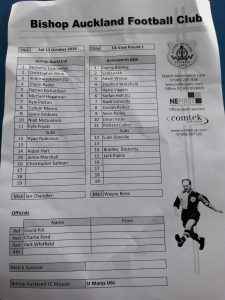 Mistakes cost Bishop Auckland dear in yesterday’s FA Vase tie as they became the authors of their own downfall.

A lack of concentration, a missed penalty, a back pass that went badly wrong and dawdling on the ball at the back gave Hemsworth MW from the North East Counties League a chance to turn this game round and they grabbed it with open arms.

The visitors were guilty of their own lack of concentration at the kick-off and they could have been a goal down within a couple of seconds.  Kyle Fryatt broke down the right and crossed the ball only for Chris Winn to scuff his shot wide.

The first 20 minutes belonged to Bishop Auckland, but out of the blue Hemsworth scored with their first attack.  A lapse of concentration allowed Nash Connolly to get on the end of an Adam Wilson cross and the winger forced the ball into the net.

At the other end, three passes to Andrew Johnson were over hit in quick succession and the Bishops man was caught offside a couple of times too.  He finally got on the score sheet in the 28th minute when he converted a penalty after Fryatt was brought down following a neat one-two involving him and Winn.

Johnson was given a chance to extend their lead in the 32nd minute when Hemsworth defender Stephen Wakefield handled the ball to stop a header going in, but Johnson hit the penalty over the bar.

Johnson played his part in the goal that saw them take the lead.  He tried to bend the ball round Hemsworth keeper Danny Rusling.  He could only push it into the path of Winn who slid it in to make it 2-1.

Even though they had been the better team in the first half, Bishop Auckland went in all square after a disastrous attempted back pass by Jamie Marshall presented the ball to Hemsworth No. 9 Seon Ripley who rounded Bishops keeper Nick Liversedge.  He then had the simple task of tapping it into the net.

The teams traded chances early in the second half – Johnson prodding the ball just wide and the visitors’ Jason Yates trying his luck from distance with a strong wind behind him, only for the ball to go a foot over the bar.

In the 58th minute Hemsworth winger Nash Connolly looked well offside but was allowed to make a clear run into the Bishop Auckland box where Liversedge managed to pull off a diving save.  By now Hemsworth were looking much more dangerous than in the first half.

In the 75th minute they almost took the lead when a Sam Leach cross was met by Connolly and his header re-bounded off the bar with Liversedge beaten.

And then with 10 minutes to go came the decisive goal.  Bishop Auckland defender Niall McGoldrick was caught in possession instead of clearing his lines.  His opposite number – Jason Yates – took the ball off him and passed it to Ripley who powered it home.

Bishops were unlucky not to grab a late equaliser.  In the 88th and 89th minutes Hemsworth managed to block three shots on the line and Rusling pulled off the save of the game to deny Johnson.  His shot, in turn, bounced up for Darren Richardson but the No. 5 couldn’t plant his header on target and their last chance was gone.