ONE PASS SEALS THE WIN 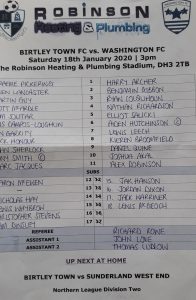 The best pass of the game produced the only goal of the game, a game that solidifies Birtley’s mid-table standing.  Meanwhile Washington, who have struggled for points, played far better than their league position would suggest.

Birtley: They were up and running first.  In the 8th minute they had a free kick cleared off the line and – save for the goal – right back Owen Lancaster produced the best four passes of the half (a judgement in no way influenced by me standing next to his father).

In the 22nd minute a Lancaster pass gave captain Tony Smith the chance to shoot.  Both that effort and a follow up by Jack Honour were both blocked.  A three-man move involving Cris Campos-Loughlin and Ben Garrity was finished by Honour who had another effort stopped by Washington captain Aiden Hutchinson.

They finally managed to find the net in the 42nd minute thanks to a beautifully crafted pass threaded through the defence by John Sherlock.  Garrity read the pass and timed his run to get ahead of a Washington defender and slot the ball past keeper Harry Archer.

They almost opened up the Washington defence in the 52nd minute when a potentially dangerous cross-field ball by Smith aimed at Sherlock was intercepted by Washington’s Lewis Leech.  Without the interception, Sherlock would have had a clear run at goal.

Substitute Christopher Stevens proved their biggest threat for the rest of the game.  In the 73rd minute he beat the offside trap, was one-on-one with Archer but just couldn’t bend the ball round the keeper and into the net.  He followed that up with a free kick that moved in the air – forcing Archer to punch it away – and then another curling shot.  In the 88th minute he had a shot come back off the post, with the follow-up by Smith hit wide.  Birtley’s final chance came with the last kick of the game.  In the 93rd minute fellow sub Sam Dinsley’s shot was parried by Archer, diving at full stretch down to his left.

Washington:  It took them a bit of time to get going.  For the opening quarter of an hour they relied on quick, first-time balls up to their attackers, usually to No. 8 Kieren Broomfield.  He was up against two or three defenders and his team mates didn’t get close enough to him to pick up any second balls.  As soon as they did, they got their first chance.  A knock down by Broomfield fell to Alex Dobinson whose rasping shot was parried out for a corner by Birtley keeper Graeme Pickering.

In the 37th minute, Dobinson tried to sneak a free kick past the wall, putting the ball a foot or two wide of the goal.  Three minutes later, Daniel Quine hit another free kick wide of the target.

As the half came to a close, a poor kick out by Pickering fell to Broomfield who passed to No. 10 Josh Akal, but he could only put the ball over the bar as Pickering scurried back to cover his goal.

In the 57th minute Dobinson sent over a cross to the far post from the right hand side, with Quine running in and planting his header wide right – a good move and a good chance not converted.  In the 64th minute a long ball from the back by Hutchinson found sub Lewis McGeoch whose first-time turn and shot curled wide right.

In the last 10 minutes they had a couple of chances but couldn’t convert them either – Quine with a turn and shot blocked by Pickering, Jordan Dixon with a shot hit wide and then finally McGeoch trying to lob the ball over Pickering, but the No. 18 didn’t get enough height on the ball. 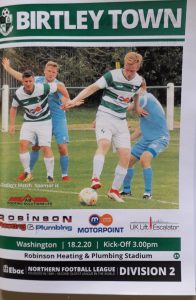