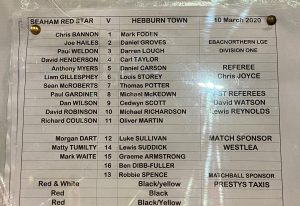 Seaham and Hebburn played out an entertaining draw at the Ferguson Motor Repairs Stadium in the Ebac Northern League.

The away side had the first chance of the game when Michael Richardson played through Cedwyn Scott, however he could only hit the side netting.

The visitors came close to opening the scoring on the half-hour mark, as Chris Bannon tipped away Richardson’s long range effort.

Seaham took the lead five minutes later as Dan Wilson picked up the ball on the edge of the box before curling his effort beyond Hebburn keeper Mark Foden.

The hosts almost doubled their lead three minutes later, however Wilson could only place his effort wide of the post.

Hebburn drew level in the 54th minute, as Scott got onto the end of Richardson’s cross, before tapping home beyond Bannon.

The away side went close to taking the lead two minutes later, as Thomas Potter picked out Richardson at the back post, however he could only send his volley over the bar.

Hebburn came close to taking the lead 15 minutes from time, however Bannon was equal to Richardson’s well struck free kick.

Seaham almost snatched all three points in added time, as Sean McRoberts skipped past Darren Lough, however he could only rattle the bar with his effort.

Hebburn remain 3rd, two points behind Shildon, while Seaham move up one place to 14th.