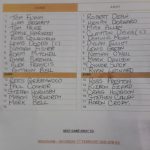 On a decidedly cool evening in West Auckland, the players did their best to warm things up early, with plenty to grab the interest for the disappointing crowd of 62.

West defender Jamie Harwood was lucky not to get a yellow card after fouling RCA’s Connor Slack who had bags of space in front of him to attack the home goal and then Slack pulled a shot wide after latching on to a ball over the top from a long kick out by the visitors’ keeper Robert Dean.

A slick move by West led to an Anthony Bell shot at Dean from a tight angle and then RCA’s No. 9 Mark Davison with a header forcing the save out of Dean’s opposite number Tom Flynn.  West were stringing their passes and moving the ball around better than RCA, but RCA looked equally dangerous on the break.

Both sides spurned chances by hitting the ball off target:  Adam Mitchell pulling a shot wide right and then Davison who turned the defender only to hit it over the bar with an almost certain goal if he’d been able to keep the ball down.  In the 20th minute a probing ball by Liam Hegarty found Amar Purewal.  It was his turn to turn the defender only for Dean to get a decisive touch on the shot that looked as though it was going to put West in the lead.  A minute later Purewal had another chance to score with he headed it over with plenty of the goal to aim at.

He made amends and it was third time lucky in the 23rd minute when he struck home after the ball was pulled back from the byline.  He got his second with a penalty awarded when Mitchell was brought down by RCA captain Clayton Davis as the West midfielder ran through the box.

As the half went on, RCA were pushed further back for longer periods, with West’s passing and movement looking sharp.

In the 34th minute, West sub Rees Greenwood couldn’t get a clean strike on the ball and Dean was able to push his shot out for a corner.  Greenwood effectively wrapped up the game three minutes before the break when he was allowed to run at the heart of the RCA defence and then struck the ball low and hard into the bottom left hand corner.

The finish was much like West’s overall play of the half:  crisp.

Despite being 3-0 down (and with nine of the first team squad unavailable through a combination of work commitments, suspensions and players being cup tied), they had their chances to get back in the game in the second half.  In the 48th minute, Slack couldn’t get his foot round the ball to get a clean shot and they an effort by Ryan Leonard bounced into the ground – taking all the power out of the shot.

Twice Slack was put through, setting him up to run at the West goal and twice he was denied by Flynn rushing out to smother and block the chances.  With six minutes to go, Slack had his final chance but he hit the ball at Flynn rather than finding the angle just inside the post.

The last chance of the game fell to Nathan Fisher who tried to flick a cross past Dean, with the ball glancing past the right hand post.

West had their regular centre backs unavailable – one abroad and one working – but they still looked in very good shape indeed for next week’s Vase game down in Plymouth. 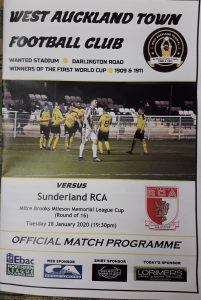