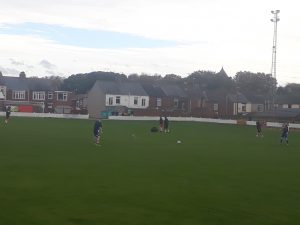 There is not quite an emergency at Dean Street, but there have been clear the air talks between board, management and players in the last few days.  New signings have arrived while others have moved on.  As Consett look good bets for the title, ambitious Hebburn track them and cup heroes Dunston lurk in the background, it was imperative that the Railwaymen got off to a good start in the FA Vase.

The draw was kind to them in that visitors Glasshoughton Welfare are a Step 6 club and one of seemingly moderate ability.  Situated in the rugby league stronghold of Castleford, they probably travelled more in hope than expectation, while the Shildon people expected to go through.

That they did was due to manager, leading goal scorer and chief cook and bottle washer Daniel Moore, who rounded off an intense opening 20 minutes of Shildon pressure when he turned in an excellent low cross from Matty Robson into the visitors’ net.

The crowd sat back and awaited, if not a deluge of Friday night proportions, at least a steady stream of goals and a comfortable progression to Round 2.

That it did not happen that way was due to the profligacy of the Shildon attack, where Jack Blackford was particularly prone to fire over and/or wide, and the obduracy of a limited but extremely hard-working Glasshoughton team, who were always in with a chance.

They fielded three players of Polish origin in their 16-man squad.  By far the most impressive of the three was goalkeeper Matius Zaniewski, a giant of a man who reminded this scribe and some of the older inhabitants of the Brown Street Terrace of a certain Jan Tomaszewski from 1973,

Zaniewski proved to be unbeatable in the air and he dealt easily with a succession of high balls lobbed into the box.  His distribution from hand was excellent and it prompted one between jobs manager to wonder what on earth he was doing playing at this level.

The game should have been wrapped up in the 60th minute when Zaniewski came dashing off his line and, aided and abetted by Reece Horne, wiped out Danny Earl.  Matty Robson stepped up to take the kick and sent Zaniewski the wrong way.  Unfortunately for the former Hartlepool and Carlisle man hit the ball against the post and it bounced far enough out to be hoofed downfield by the visitors.

The majority of the crowd of 181 were slightly edgy as the game meandered to an end.  One error could lead to extra time and the possibility of a trip down the A1 and M62 on Tuesday night, but the Shildon back four, marshalled buy the voluble Darryl Hall, held firm and keeper Shaun Newbrook was hardly bothered.

It wasn’t the best game at dear old Dean Street this season, but it produced an important win which may settle nerves as the season hits its most important period.  Consett are out of the Vase and can concentrate on the league while Hebburn are still in it and may find a day at Wembley more alluring than a midweek trip to Brighouse next season.

The Railwaymen have not quite stoked the fire up as much as they would have wanted, but unlike their near neighbours at Heritage Park, they are in the Wembley hat on Monday.  They would not be desperately keen to play a fellow NL club so let’s hope that the gods smile kindly on them.