RCA FIGHTBACK NOT QUITE ENOUGH 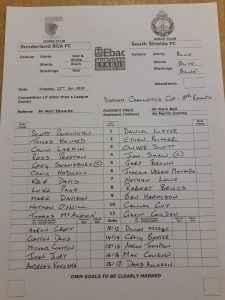 5-2 sounds a bit of a drubbing but it doesn’t quite reflect how the game panned out.  To be sure South Shields were the better side, but perhaps not quite by the margin of the final score.

After twice falling behind, the Wearsiders twice fought back to level it up, but then South Shields cranked up their game and polished the Northern League side off in the second half.

RCA’s first wound was self-inflicted.  Four minutes into the tie, keeper Scott Pocklington didn’t get enough distance on a clearance.  If fell to Robert Briggs 30 yards out and the South Shields No. 8 tried an audacious and successful lob that Pocklington got his fingertips to as he peddled backwards, but he couldn’t divert it away from the net.

RCA responded with a series of back-to-back corners, with the fourth being cleared off the line by Shields No. 6 Joachim Ursene Mouonda.  (More of him later.)

At the other end of the pitch, all of Shields’ attacks came down the right, while the RCA defence looked a tad hesitant, although they played a high back line, catching Shields offside on several occasions throughout the first half.

Their first comeback came in the 18th minute when Kyle Davis rifled a cross between Shields defenders and keeper Daniel Lister with RCA captain Greg Swansbury thumping it into the roof of the net.  It settled the team down and allowed them to get into their stride.

The next chance came Shields’ way when a fortunate deflection sent the ball past Pocklington.  Shields No. 11 Gavin Cogen was able to react the quickest and he tried to cut it back from a tight angle, but could only send it across the goal line.  RCA matched that by coming close themselves.  Perseverance by right back Tomas Howard set Mark Davison away down the right and his cross went within a foot or two of Nathan O’Neill right in front of goal.

RCA conceded their second in the 39th minute when Ross Preston pulled Cogden down as he ran through on goal after getting on the end of a Nathan Lowe through ball.  Preston had little option but to bring him down and a penalty was duly given and, in turn, duly despatched by Briggs.

In the dying seconds of the half RCA pulled it back to level terms – again thanks to a quality cross from the right by Davis.  This time it reached O’Neill who was half turned away from goal but he managed to get the outside of his boot to the ball, back across Lister and into the net to make it 2-2.

For the first 20 minutes of the second half RCA enjoyed more of the possession and spent more of the time in Shields’ half without causing the visitors too many problems.  Their best chance came in the 65th minute when Lister couldn’t keep hold of a Colin Larkin shot and Davison nicked it from him and worked himself enough space to get a shot on goal which Lister stopped as he scrambled back towards his line.

Three Shields goals in the closing 17 minutes put paid to any RCA hopes of progressing in the cup.   Ursene Mouonda battled and managed to get the ball out to sub Max Cowburn and his pass round the back of the RCA back line was met by Callum Guy with a first time volley – making it 2-3.

A pass from Guy to Nathan Lowe spliced open the defence.   Pocklington managed to get a hand to Lowe’s shot but he couldn’t stop it from going in.

2-4 turned to 2-5 in the last minute of the game when a one-two released Briggs clear in the RCA box and the Shields man completed his hat-trick with a confident finish.

And finally, back to Joachim Ursene Mouonda:  I really enjoyed watching him play and I think he had a terrifc game, a game that might well have gone un-noticed by many spectators.  For most of the game he sat in the hole just in front of his back four.  He did the simple things really well – denying RCA players space to threaten the goal, put in some well-timed tackles, always made himself available for team mates and hardly mis-placed a pass all night.  Not the star of the show, but he was an essential part of Shields’ win.