REDCAR ACQUIT THEMSELVES WITH DISTINCTION 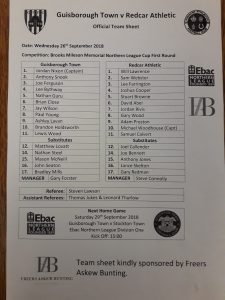 Right, let’s start at the end.

Guisborough edged this League Cup game, finally beating Redcar Athletic 5-4 on penalties and they’d been within seconds of foregoing the “delights” of a penalty shoot-out.

A substitution by Gary Forster looked to have been the decisive move in this first round tie between these first and second division teams.  Nathan Steel came off the bench and produced a beautifully weighted ball through to Brandon Holdsworth who took it right and then cut it back across Redcar keeper Will Lawrence and into the net.

The goal came in the 66th minute and all they had to do was get through the rest of the game unscathed.

Redcar saved their best move of the game to the dying seconds to send the game into the penalty shoot-out.  In the 89th minute a great 50-yard pass by Michael Woodhouse set left back Lee Farrington on his way; he in turn produced a great low ball across the Guisborough goal mouth and Stuart Browne was on hand to apply the finishing touch.

It was no more than they deserved.  In the preceeding 88 minutes they’d given a very good account of themselves.

The goals were the stand-out moments of the game which, over the 90 minutes failed to really get going.  It was eight of 10 for effort but about four out of 10 for style.

Both defences had the upper hand over the attackers.  The game opened up a bit in the 10 minutes leading up to half-time.  Of the two teams, Redcar came out after the break with more momentum but both were finding clear cut chances hard to come by until Holdsworth’s strike.

After Redcar’s equaliser – and well into added time – Guisborough keeper Jordan Nixon was egged on by the home fans to join the attack for a corner, hoping to repeat recent scoring heroics.

He was almost caught 30 yards outside his box by Redcar No. 9 Adam Preston but he couldn’t find the power or placement to get it past the home keeper.

In the 93rd minute Guisborough’s second sub – Mason McNeill – spurned a chance to score a dramatic winner of his own, only to spin his shot wide of the post.

Nixon still had a vital part to play in the shoot-out – saving Anthony Jones’ spot kick and converting the next penalty himself, leaving it to Joshua Cooper to tuck away the winner.