REPORT CARDS FOR ESH AND CESTRIANS

They often say in football you should refrain from passing judgement until you reach the milestone of 10 games into the season.

Esh Winning reached that landmark on Thursday when they welcomed an out-of-sorts Chester-le-Street to the WindowsPlusRoofs Arena and their first quarter report card will be graded with the letter ‘M’ for ‘mid-table’, with the comments section noting ‘must do better’ none more so than in last night’s contest which saw the Stags spectacularly squander a one goal advantage to eventually lose 4-2 to a Cestrian’s side skippered by former Esh man Craig Marron.

Chester-le-Street arrived in the Deerness Valley, or ‘Gods little acre’ as a wise man once declared it, for their eighth successive away game of the season, still to play on home turf, and found things difficult in the early stages as they defended down the slope in the first half.

They found things so difficult in fact they were behind inside the first 15 minutes from a root one Esh freekick as Lee McMahon lofted a long diagonal into the penalty area where captain Max Stoker was able to simply loop a header back over goalkeeper Jack Wilson into the back of the net. Easy as you like.

You’ll have had more joy trying to remove your car from the swampy marsh that resembled a car park than what the majority of the rest of the first half would offer as both sides cancelled each other out in the scrappiest of scrappy affairs that left the notes section somewhat empty.

That was until Tom Orton was forced into an excellent point blank save in the closing stages of the half to keep out Josh Akel’s goal bound header before the combination of Owen Henderson and Liam Dixon contrived to waste the excellent work of full back Fraser Colling and his pull back by missing the ball completely and then lashing over from close range.

It was a first half low on quality with more people in the half-time bar queue than there were talking points as Esh went in with a slender lead at the interval.

But if the first half was as cold as the encompassing night sky, the second half ignited quicker than the nearby coal fires of Fields Fish shop as the visitors not only restored parity to the scoreline they went ahead inside just five minutes of the restart.

First it was Dixon who capitalised on a miscue from Stags centre back Nathan Burrell in the 49th minute to race clear on Orton’s goal before superbly drilling the ball into the top corner to spark wild celebrations among the visiting contingent.

A minute later and the Cestrians had the chance to take the lead after Luke Collins was allowed to race down the right and into the area. A drop of the shoulder and a jink of the hips was enough to draw a cynical challenge from Jamie McLeod – who had little idea just how much worse his night would get from this ‘bad.’

Down went Collins and up stepped the wise old head and foot of Marron who calmly slotted the penalty down the middle to give Chester-le-Street the lead and complete a remarkable turnaround.

Last weekend I was at a fixture in Division One where the manager announced afterwards that the game resembled more of a basketball game at times and that was very much the case here as Esh looked for an immediate response through Callum Boakes with the away side looking threatening on the break.

But the home side would take just seven minutes to respond when McLeod’s long throw was headed away to the edge of the area where Jay McLean was on hand to strike a wonderful volley low through the crowded penalty area and into the bottom corner of Wilson’s right hand post via a slight deflection.

Akel steered narrowly wide for the visitors before Andrew Clarkson forced Wilson into a smart stop as the second half continued to show zero correlation to that of the first.

And then came the moment in the game with which the pendulum swung in favour of the away side. Burrell’s miscue again allowed Dixon a sight of goal but this time he was brought down by McLeod who would see red for denying a clear goal scoring opportunity.

The resulting freekick just outside the penalty area was smashed into the wall with the rebound landing at the feet of Akel who at the first time of asking arrowed a strike low into the bottom corner to put the Cestrians in front.

A goal down and a man down meant the task facing Esh was bigger than the slope in which they were kicking up and 10 minutes from time their huff and puff was extinguished when Chris Stephenson and Orton couldn’t decide which of them should clear a through ball with neither of them doing so as the pair collided with one another allowing Henderson the simplest of tasks of running the ball to an empty goal line and nudging it in.

There was still time for the night to get worse for Esh as Orton managed to get himself a slightly earlier shower than the rest of his nine remaining outfield players when he handled outside of the area as opposed to clearing with his feet from the on rushing Henderson.

There was no such time to revel in the delights of seeing an outfield player in between the sticks akin to John O’Shea’s display at Tottenham Hotspur or Niall Quinn at Bradford City with referee Morton bringing the game, and a bonkers second half, to a close soon after.

Esh players found themselves locked in the dressing room for quite some time after the final whistle, perhaps divulging on how they can improve that letter ‘M’ grade as Chester-le-Street go away with their second win of the season and move ever closer to finally playing a home game. 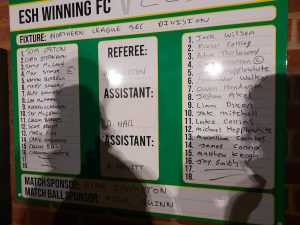