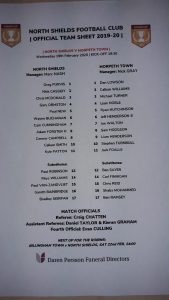 For 45 minutes North Shields held their own against a team two divisions above them.  But they faded in the second half, unable to repeat their first half endeavours.

In the first half both teams played open, attacking football, with chances at both ends.

The first came in the 3rd minute when Shields No. 9 Connor Campbell put a glancing header from a corner over the bar.  In the 9th minute captain Adam Forster dispossessed a Morpeth midfielder, passed it wide left to Kyle Patton whose cross swept across the goal mouth, with no team mate able to get on the end of it.

Despite making the early running, it was Morpeth who took the lead.  Forster cleared a corner close to the line only for the ball to be put back in by Jack Foalle with captain Jeff Henderson rising above the Shields defenders to head it in.

Two minutes later the Robins came close to levelling it up. Wayne Buchanan met a free kick with a looping header which almost caught Morpeth keeper Dan Lowson off his line, with the No. 1 forced to get back to tip it over the bar.  In the 19th minute Lowson parried a Campbell shot against the post.

At the other end excellent defensive work by left back Chris McDonald prevented an almost certain goal.  Morpeth No. 7 Joe Walton beat the offside trap, raced forward and was one-on-one with Shields keeper Greg Purvis but McDonald managed to tackle Walton just as he was about to shoot.  In the 35th minute McDonald came to the rescue again – heading a Foalle cross off the line with Morpeth attackers bearing down on him.

Morpeth’s Ryan Hutchinson then had two back-to-back chances – the first blocked by Paul New and the second well saved by Purvis.

North Shields were rewarded for their play in the last move of the half.  Campbell intercepted a crossfield pass by Morpeth, ran at goal before knocking it out to Callum Smith who hit it home to make it 1-1.

However, they fell behind in the third minute of the second half and never quite recovered.  A three-man move ended with Walton thumping the ball into the Shields net.

For much of the rest of the half Shields were pushed back much more than they were in the first half, with Morpeth keeper Lowson kept more busy dealing with back passes than Robins attacks.  Overall the game lacked the sparkle of the first half.

However, sub Gareth Bainbridge came within a whisker of equalising with eight minutes to go when he came close to connecting with a Paul Robinson cross as he slid in right in front of the Morpeth goal.

The visitors put the nail in the coffin in the 90th minute when Liam Noble drilled a free kick past the wall and between Purvis and the post to make it 1-3.  Shields acquitted themselves well, but there can’t be too many complaints about the result. 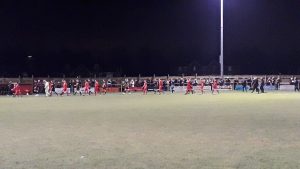 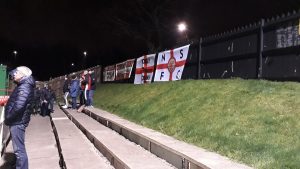