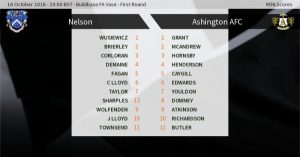 Sometimes a team can be well ahead in a game in every department apart from the scoreline.  And sometimes it takes a second goal before the team can dispel the worries about failing to turn their superior play into goals.

The Colliers should probably have been more than one-nil up at half-time, with Jay Hornsby coming closest with a shot deflected off the post in the 26th minute.  Nelson had started with plenty of energy and attacking intent, but once that had fizzled out Ashington started to put their stamp on the game.

The only surprise was that it took until the 31st minute before they got their noses in front.  Lee McAndrew sent over a cross from the right wing, Gerard Richardson met it with a header, the Nelson keeper got a touch on the ball but couldn’t deflect it away from the goal.  Seconds earlier McAndrew and Richardson had linked up in similar fashion only for the Nelson keeper to paw that header wide of goal.

The “nerve settler” was provided by Jack Butler in the 47th minute after the Colliers No. 11 controlled the ball and shrugged off a challenge before hitting it past Marcel Wsiewicz in the Nelson goal.  Finally, the scoreline reflected the control that Ashington had exerted over the team from the second tier of the North West Counties League.

After that, there was only going to be one winner of the cup tie.

In the 52nd minute the Nelson defence only half cleared a Chris Youldon shot.  Jack Butler picked up the loose ball and hit it back across the keeper to make it 3-0.

In the 60th minute Richardson rose above the Nelson defence unchallenged to get on the end of a corner to add a fourth goal and Zak Atkinson completed with scoring in the 80th minute with a penalty after Youldon was brought down in the Nelson box.

Mission accomplished with something to spare for the Colliers.

Next up in the Vase for the Colliers is a trip to last year’s finalists Stockton Town.