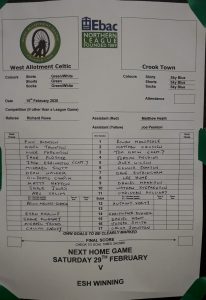 Top of the table clashes don’t always live up to their billing, but this encounter was every bit as good as it promised to be.

West Allotment Celtic have been the pace setters in the second division, while going into the match, Crook were on a run of 12 wins, two draws and a defeat in their previous 15 league games.

The game got off to a brisk start with Crook winger Christian Holliday having a shot well saved by Allotment keeper Finn Hodgson.  That was soon followed by controversy with Allotment No. 9 claiming handball by a defender just as he was about to break clear, but referee Richard Rowe gave a free kick to the visitors – seeming to indicate a shirt pull by the attacker.

After the initial Crook effort, Allotment took the initiative but it was the visitors who grabbed the lead in the 13th minute.  The referee played a good advantage for a foul, allowing Holliday to break down the left and cross the ball, with No. 10 Nathan Stephenson scuffing the ball home under the keeper.

The lead lasted a matter of seconds with an excellent solo run and goal by Allotment left winger Abu Salim who turned the Crook defence one way then the other before prodding the ball past keeper Ronan Makepeace.

The chances kept on coming.

Two minutes later Holliday sent over another dangerous cross, met first time by No. 9 Daniel Maddison, with Hodgson making a fingertip save.  In the 20th minute his counterpart – Matty Hayton – put the hosts ahead.  Shane Jones pushed the ball out to left back Luke Parkinson who delivered a perfect cross between defenders and keeper which Hayton buried.

The game then developed into a midfield tussle, with both teams trying to thread the ball between defenders to release their strikers, with the defenders able to intercept it.  With the last attack of the half Crook were level.  The ball fell to captain Tom Gavin who was in bags of space 25 yards from goal.  His deflected shot left Hodgson rooted to the spot and all of a sudden it was 2-2.

In the second half it was Crook who seized the initiative, while Allotment couldn’t get their game back up and running.    Allotment captain Jack Errington was forced into a crucial interception of a Holliday cross, a Gavin free kick bounced just wide of the post and then Crook No. 15 Daniel Kent was within inches of connecting with a Calum Johnston cross.

Within a three minute spell Crook wrested control of the game.  A cross-cum-shot by Maddison floated over Hodgson and into the net off the right hand post.   And then two crucial contributions by Crook substitute Joseph Smith sealed the win.  In the 80th minute he managed to dispossess Hayton just as he was about to shoot and then a minute later his inch-perfect pass found fellow sub Kent who ran on and thumped the ball into the net to make it 2-4.

The win meant that Crook overtook Redcar Athletic into second place, but the title remains Allotment’s to lose. 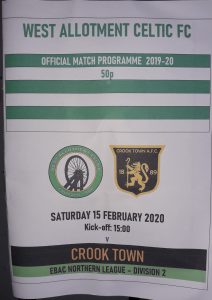