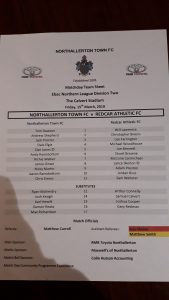 You might need to be sitting down for this, but for the first time this season I managed to witness a Northallerton Town win – at the sixth time of asking.  I was garnishing something of a Jonah reputation, especially with their chairman Peter Young, after witnessing two draws and three defeats so far this season.

It was a fully deserved victory too.

They started positively and were 1-0 up in the 7th minute when Richie Walker’s put the ball through  to Chris Emms who scored with a crisp finish, to round off the first real attack of the game.

In the 25th minute Walker launched the ball into the goal mouth from close to the right touchline, forcing Redcar keeper Will Lawrence to dive backwards to make the save.

It took Redcar almost half an hour to make any headway going the other way and show a bit more purpose to their play.  They’d spent quite a lot of their time up until then passing the ball sideways and backwards.  Their play certainly lacked drive and penetration.  Too many of their long balls into the Northallerton box also seemed to be kicked in hope than with any great precision.

Their best bit of individual skill came in the 42nd minute when Northallerton’s Dale Elgie sent Walker away into promising space at the edge of the Redcar box, only for the full back Lee Farrington to put in a well-timed tackle before Walker could get a shot away.

Just like the first half, Northallerton started the stronger in the second half, while Redcar were finding the Town defence a tough nut to crack.  They were given a helping hand in the 58th minute when Town captain Dan Jones was sent off for a second yellow card.

But they couldn’t make the extra man count.  A high ball into the box by Jordan Rivis caused problems for the Northallerton defence in the 73rd minute and five minutes later one of their best attacks was stopped in its tracks when substitute Sam Calvert was judged to have handled the ball on the edge of the box.

For the last 7-8 minutes of the Redcar pushed forward with more determination and more bodies as they tried to find an equaliser, but as they pressed forward it was Northallerton who bagged the next goal and secured the win.  Town substitute Ryan McKendry deserves most of the credit for the goal:  he won the ball back off a Redcar defender close to the visitors’ corner flag, got round another Redcar defender and set Northallerton No. 9 Nick Martin up with a cross that the striker side-footed in.

The goal capped the usual lazy as a bee performance by Martin who had to battle hard after Jones’ dismissal as Northallerton pulled more men back into midfield and defence, leaving him somewhat and understandably isolated.

In the 6th minute of added time Northallerton almost got a third as Redcar pushed just about everyone forward.  Town’s Damon Reaks got behind Redcar No. 5 Joe Bennett and raced towards goal only for the defender to put a great tackle in to whip the ball away.

A win sealed.  An albatross off the neck.  Back on Mr Young’s Christmas card list (For now anyway.  We’ve still got the EA Cup Final to go.)

PS – And the winner of the “Trained Observer of the Day” competition was assistant referee Jess Shuker who spotted that Dan Jones had donned a tracksuit top after being sent off and was trying to get in the dugout.  What’s even more commendable was that she was on the opposite side of the pitch too.  He was duly sent to the sidelines to watch the rest of the game.