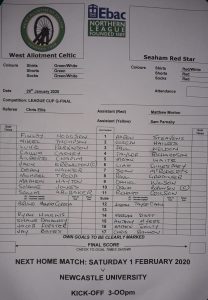 Druid Park turned into a shooting gallery for last night’s last 16 of the league cup.

I can’t remember a game where there were so many attempts on goal.  The downside was that many were off target.  The upside was that the game turned into a proper, good old-fashioned cup tie.

For the first 20 minutes, it looked as though Red Star were going to trample all over Allotment, who were pinned back by a series of attacks.  The one shot on target – by Sean McRoberts – was well saved by Allotment keeper Finlay Hodgson diving down to his left.  The home sides’ first shot was in the 21st minute and was put high and wide by Michael Trodd.

Having withstood the onslaught, Allotment took the lead with the best goal of the game and their first shot of the game that was on target.  Matthew Hayton ghosted past a couple of defenders and adroitly placed it in the bottom right hand corner of the net.  Hayton almost got his second two minutes later with a header saved at point blank range by Red Star keeper Aaron Steavons.

As we approached the half-hour mark, Red Star had another couple of shots but Hodgson had only had to make one save of any significance.

Red Star continued to create good chances but were unable to convert them – two balls cleared off the line by Allotment defenders and a dangerous cross by Richard Coulson that flashed across the six yard box, with three attackers bearing down on goal.  In keeping with the rest of the half, Hayton put the last chance of the opening 45 minutes over the bar.

Allotment gave themselves some breathing space in the 50th minute when Trodd somehow squeezed the ball between keeper and post from the tightest of angles.  As Red Star pushed forward, they fell further behind to a quick break by Trodd and Salim Abubaker who was put through in acres of space and who had the easy task of stroking the ball past Steavons.

It looked as though Allotment’s more clinical finishing had sealed the game, but Red Star mounted a spirited comeback and gave themselves a bit of hope in the 66th minute when Mark Waite got the slightest of touches to a corner that got through a packed box, finding the No. 5 at the far post.

A couple of substitutes helped to bring a new burst of energy for the visitors, with most of their attacks down the right through Jaden Taylor-Cahill.  Paul Gardiner got on the end of one of his crosses, bringing a diving save out of Hodgson.

Red Star continued to force Allotment back and their pressure was rewarded in the 83rd minute when a long ball into the box evaded everyone but Morgan Dart at the far post, with the No. 14 heading it home.  Nerves were starting to jangle at the back for the home team, but they were able to close out the game and are through to the quarter finals. 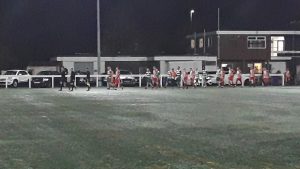 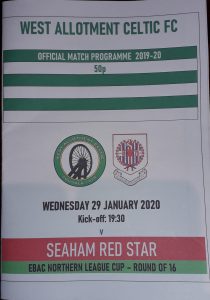